Ukraine's President Viktor Yushchenko and dozens of mourners prayed and lit candles early Thursday to mark the precise time that the Chernobyl nuclear reactor exploded 21 years ago in what became the world's worst nuclear accident. 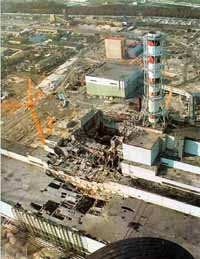 Chernobyl's Reactor No. 4 exploded at 1:23 a.m. on April 26, 1986, spewing radiation over a large chunk of the former Soviet Union and much of northern Europe.

"With grief we bow our heads before all the hero rescuers and victims of this nuclear disaster which hurt our land," Yushchenko said in the early morning ceremony as a bell tolled.

An area roughly half the size of Italy was contaminated, forcing the resettlement of hundreds of thousands of people and ruining some of Europe's most fertile farmland.

At first, Soviet leaders tried to cover up the accident. Only on April 28, after scientists in Sweden detected radioactivity, did the Kremlin acknowledged an accident had occurred. But even then, the traditional May Day parades went ahead and millions filled the streets unaware of the invisible fallout.

"It is a day to remember my friends who gave their lives to save Europe from catastrophe," said Oleksandr Naumenko, a former policeman and one of the rescuers, as he lit a candle.

Death tolls connected to the explosion, which released about 400 times more radiation than the U.S. atomic bomb dropped over Hiroshima, remain hotly debated, although at least 31 people died from illnesses caused by radioactivity.

Thousands have been diagnosed with thyroid cancer, and the U.N. health agency said about 9,300 people were likely to die of cancers caused by radiation. Some groups, however, including Greenpeace, have put the numbers 10 times higher.