Estonian police set up a security perimeter around a disputed World War II monument early Thursday morning, Estonia media reported, signaling the start of excavation work at a nearby grave. 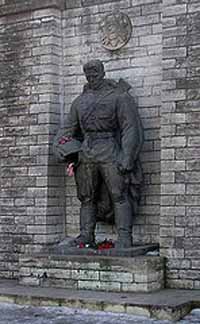 Officials anticipate unrest over the planned excavation in downtown Tallinn. Estonia's center-right government has vowed to move the Soviet grave and a war memorial next to it, but the Baltic state's ethnic Russians have threatened to prevent the relocation

Early Thursday, police in riot gear were positioned to block off all approaches to the monument - known as the Bronze Soldier - and a security fence was erected around the perimeter, the Postimees daily reported.

The heightened security suggests that the excavation of the Soviet war grave next to the monument will begin later in the day.

On Wednesday Prime Minister Andrus Ansip said the operation could last up to two weeks.

The grave is believed to contain the remains of 14 soldiers.