Former vice president Zuhair Masharqa, who survived numerous purges to become Syria's longest serving No. 2, has died at the age of 69. 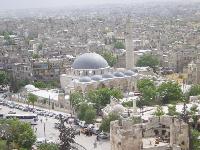 Masharqa, who was vice president for 22 years, died of a massive heart attack at his home in Damascus Tuesday.

The Syrian Arab News Agency said he would be buried in Aleppo, his hometown in northern Syria, on Thursday.

He began his political career as governor of the northern province of Hama in 1973. He joined the regional leadership of the ruling Baath Party in 1975.

Masharqa was appointed to the Cabinet in 1978 as minister of education and became vice president in 1984.

President Hafez Assad clearly valued his loyalty as Masharqa remained in the upper ranks of government despite many purges.

He retired last year when President Bashar Assad, who had succeeded on the death of his father in 2000, appointed Foreign Minister Farouk al-Sharaa as vice president.

He is survived by his wife and five children.