Blacks already feeling the pinch from a housing shortage in the New Orleans area after Hurricane Katrina are facing racial discrimination in their search for rental property . 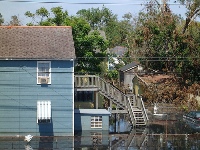 In one example, an agent told the black tester who responded to an apartment ad on Jan. 22 that only one unit was available, and not until February. The same agent told the white tester later that day that two units would available Feb. 1 and mentioned two other units.

James Perry, the center's executive director, said the group intends to sue several of the landlords.

"At a time when people need housing desperately, we really can't stand to have discrimination occurring," Perry said.