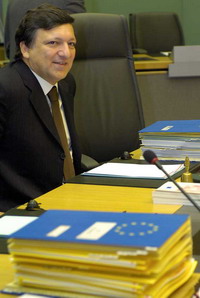 The EU constitutional project will be a subject for the closed-door talks with EU leaders in Portugal, which will be hosted by European Commission President Jose Manuel Barroso.

Barroso was organizing the May 12-13 meetings in Sintra, on the outskirts of Lisbon, with a "wide open" agenda, Commission spokeswoman Pia Ahrenkilde Hansen said.

"It's a brainstorming," she said.

She would not say if all 27 EU leaders would be invited, saying only that invitations would be sent to "a limited number of participants."

The EU chief has been increasing efforts to resolve the standstill over the EU Constitution, and encouraged behind-the-scenes talks between EU capitals. The draft treaty, which needs unanimous backing from all member states, has been approved by 18 countries, but was rejected by Dutch and French voters in 2005 referendums.

The charter aims to streamline EU decision-making, boost the bloc's international role and prepare it for future expansion.

German Chancellor Angela Merkel, whose country currently holds the EU presidency, has been trying to resolve the standoff and was expected to propose a solution during a June summit of EU leaders.

Many countries, including Britain, Poland, the Netherlands and France, want to reopen and strip down the current draft text and are keen to scrap controversial parts of the charter, notably its name, which for many suggests the creation of a European super state.