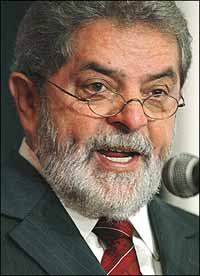 The autonomous, nonpartisan election court unanimously cleared Silva, saying there was not enough evidence to link him to the scandal.

Silva could have been stripped of power if the judges had ruled he was guilty, according to a statement from the Supreme Electoral Tribunal posted on its Web site.

Silva's political opponents claimed the ruling Workers' Party tried to pay US$770,000 (EUR608,200) for a dossier linking then-gubernatorial candidate Jose Serra to graft when he was health minister between 1998 and 2002. A motion filed by the opposition Social Democratic Party said Silva knew of the alleged plot.

The so-called dossier scandal surfaced shortly before the Oct. 1 first round of presidential elections. Silva, who has never been linked directly to the scandal, was re-elected in a