A couple convicted of tax evasion for concealing $1.9 million (1.4 million EUR) in income was sentenced to prison, but they refused to attend the hearing and to leave their fortress-like mansion. 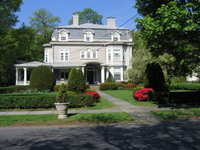 Ed and Elaine Brown insist tax laws do not exist and have holed up in their hilltop home in Plainfield, which has a watchtower, concrete walls and the ability to run on wind and solar power. Ed Brown, 64, said he has stockpiled food and supplies.

The Browns were convicted in January of scheming to hide $1.9 million (1.4 million EUR) of income between 1996 and 2003. They were also convicted of using $215,890 (158,953 EUR) in postal money orders to pay for their residence and for Elaine Brown's dental practice. The money orders were broken into increments just below the tax-reporting threshold.

U.S. District Judge Steven McAuliffe sentenced them each to 5 1/4 years in prison. They skipped the sentencing hearings, and in a telephone interview, Ed Brown said they will not surrender to federal authorities.

Assistant U.S. Attorney Bill Morse said the former exterminator and his dentist wife have acted as though they are above the law.

U.S. marshals have been ordered to arrest the couple but said they are not planning to storm the home, blockade the roads or cut off supplies.

"We're not going to engage in that kind of game with them," U.S. Marshal Stephen Monier said. But, he added, "law enforcement is not going away and neither are the warrants."

In telephone interviews, Ed Brown said the couple will stay in their home despite convictions and warrants.

"I could care less what he does," Brown said of McAuliffe. "I can't talk to a fiction. You're a fiction, too."

The Browns based their defense on a theory that no law exists requiring tax payments.

Elaine Brown, 66, said Monday that she does not recognize the government, and that its officials are "a fiction in my life."

Outside the courthouse, about a dozen Brown supporters protested the proceedings. Waving "Don't Tread on Me" flags and holding signs, they said the entire process was a sham.

"We might as well be in Soviet Russia or Nazi Germany," said Dennis Mounce of Manchester.

The Browns stopped attending the court proceedings halfway through their trial. Elaine Brown returned at the end to be convicted. Ed Brown remained on the 110-acre (44.5-hectares) retreat.

After the verdict, Elaine Brown was released to her son in Worcester, Massachusetts, and promised the judge she would have no contact with her husband. But she violated her bond agreement and returned to the couple's home.