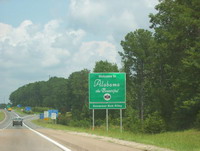 Neither resolution will become official unless approved by the other chamber and signed by the governor.

Moore's resolution expresses state government's "deepest sympathies and solemn regrets to those who were enslaved and the descendants of slaves, who were deprived of life, human dignity, and the constitutional protections accorded all citizens of the United States."

"It's been a long time coming," Moore said.

Sanders' resolution says "an apology for centuries of brutal dehumanization and injustices cannot erase the past, but confession of the wrongs can speed racial healing and reconciliation."

The House and Senate acted after turning back efforts to turn the apology into an expression of regret for slavery.

"What I have a problem with is apologizing for something I didn't do," said Republican Rep. Jay Love of Montgomery, Alabama. Love tried unsuccessfully to rewrite Moore's resolution.

Moore said the legacy of slavery continued through segregation laws that existed during many legislators' lifetimes, and the legacy lingers today with white flight from public schools and job discrimination.

Opposition came from white Republicans who expressed concern the resolutions would be used to seek reparations.

Moore and Sanders agreed to add language that said the resolutions were not intended to be used as the basis for lawsuits.