Florida prison chief gets 8 years of imprisonment in bribe case

Florida's prison former head was sentenced to eight years in federal prison Tuesday for accepting thousands of dollars from a prison contractor. 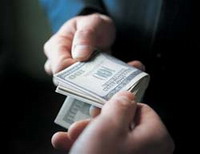 Florida prison chief gets 8 years of imprisonment in bribe case

James Crosby, a 31-year employee of the Corrections Department, apologized moments before the sentencing.

U.S. District Judge Virginia Hernandez Covington said she was disappointed that Crosby had not paid any of the $130,000 (95,714 EUR) he agreed to pay in his plea bargain, but his attorney said Crosby had no money.

Crosby has blamed some of his actions on alcohol abuse, and on Tuesday the judge asked that the Bureau of Prisons evaluate him to see if he needs alcohol abuse treatment.

Crosby and his friend, Allen Clark, formerly a regional director for the department, pleaded guilty last July to accepting $130,000 from American Institutional Services, a company that sold snacks and drinks to prison visitors on weekends.

Clark is scheduled to be sentenced Wednesday.

Acting U.S. Attorney Jim Klindt said the government could ask for a reduction in Crosby's sentence based on his cooperation in the scandal, which is continuing.