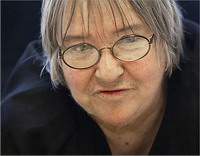 The state Supreme Court's Appellate Division said Stewart became subject to losing her law license immediately upon being convicted of a felony on Feb. 10, 2005.

The appellate panel denied Stewart's request to voluntarily resign from the practice of law. The court said her request was in a letter dated Nov. 14, 2006, after she was convicted, and therefore her resignation could not be accepted.

The court said Stewart's disbarment arose from two statements she gave to the U.S. attorney's office in Manhattan in 2000 and 2001 agreeing to abide by the U.S. Bureau of Prisons' restrictions on her client, Sheikh Omar Abdel-Rahman, who is serving a life sentence for plots to assassinate Egypt's president and blow up New York landmarks.

Stewart, 67, agreed that she would be accompanied only by Arabic interpreters so she could talk to Abdel-Rahman about legal matters and that she would not use those contacts to pass messages from him to third parties, including the news media.

She "was found to have knowingly made materially false statements," the five-judge state appellate panel wrote.

On Oct. 16, 2006, U.S. District Judge John G. Koeltl sentenced Stewart to 28 months in prison. Government prosecutors had asked for a sentence of 30 years, and many observers called Koeltl's sentence lenient. Stewart called her sentence "a great victory against an overreaching government."

Koeltl permitted her to remain free pending federal appeal, though he said there was ample evidence she had smuggled messages between Abdel-Rahman and senior members of an Egyptian-based terrorist organization.

The state appellate court said each count of making a false statement was analogous to a state felony statute against filing a false written statement.

Stewart's appellate lawyer, Joshua Dratel, declined to comment on the disbarment ruling, but he said that if a lawyer's felony conviction were reversed the disbarment could be vacated and the lawyer reinstated to practice law.