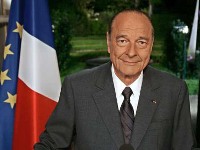 Only four of the dozen candidates including conservative front-runner Nicolas Sarkozy and Socialist Segolene Royal have a real chance of being among the top two who will face each other in a final round of voting May 6. Francois Bayrou, a lawmaker with farm roots who has become the election's surprise third force, is a wild card in the mix.

The new president will succeed Jacques Chirac, the head of state for the past 12 years, and must revive a large but listless economy and bring alienated young Muslims into French life, among a host of other problems.

Turnout, which could prove critical to the outcome along with voters making last-minute decisions soared to 73.87 percent three hours before all polls close at 8 p.m. (1800 GMT). That was the highest turnout for that hour since at least 1981, five elections ago. The closest such turnout was in 1988 when 69 percent of the electorate had voted by 5 p.m.

It was far above the low noon turnout of 58.5 percent in the 2002 first-round vote, which sent extreme-right leader Jean-Marie Le Pen to the runoff with Chirac in a shock to the nation. Voter registration drives this year added 3.3 million people to the electoral register.

At least one-third of the electorate has said it was undecided ahead of the vote, and their ballots could skew soundings from opinion polls.

All three leading contenders are in their fifties with backgrounds that set them apart from the old-guard political elite. Each has promised a new approach to politics and each, in his or her way, has vowed to change the status quo. Royal is the first woman to become a serious contender for the French presidency.

The eight other contenders range from the anti-globalization sheep farmer Jose Bove to Trotskyist Arlette Laguiller.

"There will, indeed, be a big change after the elections," said 80-year-old Colette Martin, voting in Versailles, west of Paris. "Another generation will come to power."

For the first time, voting was staggered, with France's overseas territories going to polls Saturday so votes from the country's far-flung regions would be sure to be counted.

Initial projections from polling firms were expected at 8 p.m. (1800GMT), based on a partial count of votes from hundreds of selected polling stations around the country. Voting stations begin closing at 6 p.m. (1600GMT) with those in large cities locked down by 8 p.m.

When polling stations opened in mainland France at 8 a.m. (0600GMT), no one could say with certainty whether the nation's voters would give Sarkozy and Royal the top two spots.

Sarkozy, the former interior minister who has led polls for months, frightens some voters with his tough-talking ways. Some also fear he could barrel France into a full market economy at the expense of coveted protections in the workplace and other areas of life. Such traits are deemed qualities by supporters of Sarkozy, who say France needs a leader who won't mince words.

"I am waiting calmly," said Sarkozy, voting in posh Neuilly-Sur-Seine, just west of Paris, where he presided as mayor.

"What is important is that the French turn out in large numbers to vote and that this be a great moment in French democracy," said Sarkozy, who has the powerful Union for a Popular Movement, the governing party, behind him.

Eliane de Pouzolz, 60, a retired secretary in the poor Paris suburb of Clichy-Sous-Bois, where three weeks of nationwide youth rioting started in 2005, reflected concerns of voters who despair that, despite the promises, France will refuse to change.

"Politicians talk a lot but nothing ever changes. France is stuck," she said.

Bayrou, trying to open a middle course between France's left-right divide, is the only one of the top three candidates to have run for president in the last election in 2002, when he finished with a lowly 6.8 percent of the vote.

Now, with his close, third-place showing in polls, he threatens to steal votes from the Socialist candidate, as do five other leftists with no hope of winning, and from the right.

In Conflans-St.-Honorine, on the Seine River west of Paris, many voters said their choice was determined by the desire to ensure that Sarkozy is not elected a scenario also being played out in rough suburbs.

"He is a wonderful orator," Samuel Verdier, a 19-year-old first-time voter, said of Sarkozy. "But I feel that he is extreme-right and that he just doesn't admit it." Verdier voted for Bayrou instead.

Candidates set an example with morning voting. Royal voted in her home district of Melle, in Les Deux Sevres in western France. Bayrou voted in Pau, near his hometown near the Pyrenees mountains, and far-right leader Le Pen voted in Saint-Cloud, just west of Paris.

The nation was also watching extreme-right leader Le Pen, who places fourth in polls. At 78, the anti-immigrant candidate who blames newcomers for French economic and social woes has promised another "big surprise" this year. However, Sarkozy has worked unabashedly to seduce Le Pen voters, even proposing a ministry of immigration and national identity.

One factor that contributed to Le Pen's performance five years ago was the relatively low turnout 71.6 percent that may not reproduce itself this time.

The presidential election is followed by voting for a new legislature in June.