Firefighters on Thursday rescued two window washers trapped outside the 37th floor of an office building by cutting through a window and pulling them inside. 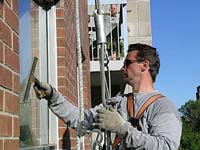 The workers were trapped about 400 feet (122 meters) above a Manhattan avenue because their movable scaffolding was stuck and tilting dangerously.

Specially trained firefighters used a diamond-studded saw, which cuts smoothly through glass, to make a 4-foot (1.2-meter) hole in the window and pull the workers inside the building. The rescue took about 20 minutes.

"If you don't have to dangle someone 300 or 400 feet in the air, it's always better," the rescue unit's Capt. Robert Morris said.

Firefighters used to remove windows during high-rise rescues, but had to find an alternative because windows are now being put into buildings from the outside, firefighters said.

"They are used to being out there. It's their job, so they were not too panicked," Lt. Christopher Gaby said of the rescued men.

The rescue was handled by an elite fire unit, known as Rescue 1, which is trained in scuba diving and high-rise rescues, among other specialties. Besides the handheld diamond saw, they travel with equipment such as chain saws, pavement breakers and thermal imaging cameras.