Beluga whales to be listed as engandered species in Alaska

Beluga whales have long delighted residents and tourists alike when spotted swimming the silty waters off of Anchorage, but a federal agency says the gregarious white whales are in danger of becoming extinct. 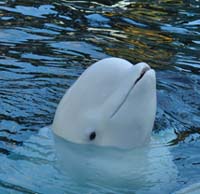 Beluga whales to be listed as engandered species in Alaska

The National Marine Fisheries Service on Thursday proposed that the small whales with the prominent foreheads in Cook Inlet be listed as endangered under the federal Endangered Species Act.

"There are few places in the world like Anchorage where a species of whale is as visible, enthralling and accessible as the Cook Inlet beluga," said Mike Frank, attorney for Trustees for Alaska, which represented a dozen conservation groups who have petitioned to get the whales protected. "We need to do all we can to make sure that continues in the future."

Beluga whales are small, toothed whales that are gray when born and white as adults. According to the fisheries service, they are extremely social and found in groups of between 10 and several hundred. Alaska has five distinct populations: the Beaufort Sea, eastern Chukchi Sea, eastern Bering Sea, Bristol Bay and Cook Inlet.

The fisheries service found that the Cook Inlet belugas have a 26 percent chance of becoming extinct in the next 100 years. If certain events take place, such as a mass stranding or an oil spill, the chances the whales will disappear from the inlet increase greatly, the agency said.

The fisheries service has one year to complete the rule and identify critical habitat for the whales. The agency is accepting public comment until June 19.

The next step after that would be to come up with a recovery plan, said Brendan Cummings, a lawyer with the Center for Biological Diversity, one of the petitioners.

"If there is any hope for them, the full force of the Endangered Species Act should be brought to bear to help," Cummings said. "It will bring everyone with an interest and knowledge of belugas to the table to figure out what can be done ... to save these incredible animals."

Probably fewer than several thousand beluga whales once swam the waters of Cook Inlet. Numbers now have dwindled to about 300 animals. The fisheries service estimates the population has declined more than 4 percent annually since 1999. The goal is to help the whales recover to about 780 animals.

The reasons for the downward spiral are unclear. Some believed that over-hunting by Alaska Natives was to blame, but numbers have continued to diminish even after subsistence hunting was severely curtailed. Hunters this year canceled their hunt.

"We have worked with Alaska Native hunters to attain a manageable level of subsistence harvests in Cook Inlet and hoped this would bring about a recovery within the population," said Doug Mecum, acting administrator for NOAA Fisheries in Alaska. "The anticipated recovery has not occurred."

In 2000, the fisheries service refused to list the whales under the Endangered Species Act, choosing instead the less rigorous listing of "depleted" under the weaker Marine Mammal Protection Act.

The agency reconsidered its decision when faced with the latest petition by the conservation groups and evidence that Cook Inlet beluga numbers continued to decline.

The listing for the Cook Inlet belugas means more scrutiny will be paid when federal permits are sought for activities, such as oil and gas development and coal mining, to make sure those activities will not impede the whales' recovery, Cummings said.

"The point is to recover the belugas, not stop any particular project," Cummings said. "There are not many places in the United States where you can look out your office window and see a pod of whales."