Police captured a drug trafficker suspected in the brutal slaying of three Salvadoran politicians and their driver - a crime that provoked a scandal over the alleged involvement of Guatemalan police officers. 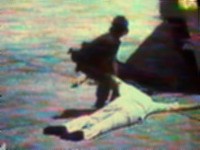 Prosecutors were expected to charge him in the killing of the three Salvadorans, all members of the Central American Parliament, whose charred bodies were found along a rural road on Feb. 19. Two lawmakers were burned alive, and the driver and the third lawmaker were killed before their bodies were set afire, an autopsy showed.

All of the suspects allegedly were seen by witnesses and recorded by security cameras at a gas station buying fuel to set the victims' vehicle on fire.

Also believed to have been involved were four detectives from the national police department's organized crime division, who were arrested and then killed in jail days later under circumstances that remain murky.

The scandal over alleged links between police and the killings forced the resignation of Guatemala's interior minister, the police chief and other police officials. Meanwhile, the Central American Parliament has considered moving its headquarters out of Guatemala.