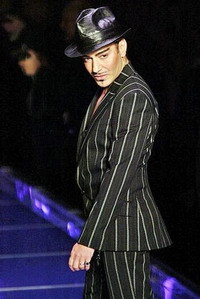 The five ads - which appeared in March in French Vogue and Elle magazines, as well as several other publications in Britain and Russia - featured three enlarged contact print images of models, highlighted with colored brushstrokes.

Vallet said the ads clearly violated intellectual property laws because Galliano never asked Klein's permission to use the style, which the New York-born photographer developed more than a decade ago. He ordered Galliano, who designs for French luxury house Christian Dior as well as his own label, to pay for the verdict to be published in the magazines in which the ads appeared.

Galliano's lawyer had argued that the ads did not constitute plagiarism because their images did not look like those from Klein's work. Galliano has appealed the decision, in an attempt to lower the fine, judicial sources said.

In an interview in Thursday's Le Monde daily, Klein said he was "hurt" by Galliano's appropriation of his style.

"I am bitter because this glaring plagiarism represents an inexplicable slap in the face to my work," he said.