Cameroon will give free treatment to all HIV/AIDS patients in the West African country starting next month. 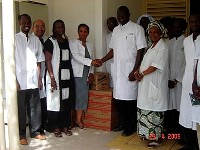 "The government of the Republic of Cameroon has decided today that there will be free treatment with antiretroviral (drugs) for all people living with HIV/AIDS eligible for this type of treatment," Minister Urbain Olanguena Awono told reporters.

He said the drugs were being funded by government spending and grants from groups like the Global Fund and the Clinton Foundation. He did not provide details on how much various groups were giving.

The program is expected to cost about CFA5.5 billion (US$11.9 million, EUR8.7 million) this year, treating about 47,000 people, Awono said. He said Cameroon is generally estimated to have an HIV/AIDS rate of 5.5 percent.

The minister did not say how long the program was scheduled to last. His office did not respond to calls seeking further information.

A typical monthly regimen of AIDS drugs costs about US$14 in Cameroon, a price that can be steep in a country where the majority of the population are subsistence farmers.

The country of 18 million is the most recent nation to adopt a sweeping all-access program to antiretroviral drugs, but it is not the first. Brazil, Senegal, Ethiopia, Tanzania and Zambia all offer free AIDS treatment, according to the World Health Organization. Nigeria and Congo have recently announced plans to do so.