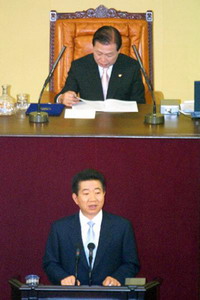 After the delay because of Pyongyang's insistence that Seoul pledge food assistance to the impoverished nation despite its failure to live up to a pact on nuclear disarmament, North and South Korea formally opened economic aid talks Thursday.

Meanwhile, the North rejected calls from a Washington lawmaker to return a U.S. warship captured nearly 40 years ago.

South Korea has wanted to use this week's meetings - aimed at discussing aid to the North - to appeal to Pyongyang to implement its February pledge to start dismantling its atomic weapons programs, possibly using rice aid as leverage.

The North failed to meet a Saturday deadline under that agreement to shut down its sole operating nuclear reactor, saying it wanted to make sure a separate financial dispute was resolved.

Details of the opening session of the aid talks in Pyongyang were not immediately available as only the first minutes of the meeting were open to the press, during which chief delegates from the two sides exchanged pleasantries, according to pool reports.

The opening was delayed by nearly eight hours after North Korea demanded to see a draft statement in which South Korea pledged to provide rice aid to the North even before negotiations began, pool reports said.

The North withdrew the demand later after the two chief delegates met, the reports said.

Despite the impasse, the two sides had lunch together and the South's chief delegate, Chin Dong-soo, asked if the North would be willing to return a captured U.S. warship now on display beside a Pyongyang river.

The USS Pueblo - taken in 1968 while on an intelligence-gathering mission off the North Korean coast - is the only active-duty U.S. warship in the hands of a foreign power.

"Return? What do you mean by return? (The ship) is such an important thing," the North's chief delegate, Ju Dong Chan, told Chin, according to pool reports. "As we already decided not to do that, that's it," Ju said, shaking his head.

In Washington, Republican Sen. Wayne Allard reintroduced a resolution Wednesday demanding that North Korea return the Pueblo, and he sent a letter to U.S. Secretary of State Condoleezza Rice suggesting she look into the matter.

Seoul has agreed to discuss the North's request for 400,000 tons of rice at this week's talks - the 13th such session - but it was not clear if it would go ahead with shipping the food due to the lack of progress on the disarmament agreement.

Following the February nuclear deal, South Korea has restarted most aid shipments to the North that had been suspended amid tensions over the North's missile and nuclear tests last year.

But Seoul has continued to withhold food assistance in a symbolic gesture to put pressure on the North to carry through with its nuclear obligations.

The North has said it is waiting for a separate financial dispute to be resolved involving US$25 million (Ђ18.6 million) in funds frozen in a Macau bank that Washington blacklisted for alleged complicity in North Korean money laundering and counterfeiting.

At an opening banquet Wednesday evening, the North pressed the South to separate the two issues.

Earlier Wednesday, South Korean President Roh Moo-hyun said the delay in moving on the nuclear agreement had been due to a "technical glitch" but that the problem was almost solved.

A Japanese news report Thursday said North Korea has begun transferring some of its funds from Macau to an unnamed bank in Southeast Asia.

The Yomiuri newspaper said it would take more than a month for the transfer of all 52 accounts to be completed. The paper quoted unidentified officials related to North Korean banks holding accounts in the Macau bank, Banco Delta Asia.

A BDA spokesman did not immediately return a reporter's call. Spokeswoman Wendy Au at the Monetary Authority of Macau declined comment.

The North and South remain technically at war but have embarked on a course of reconciliation after their leaders met in a 2000 summit.