For years, visitors who wanted to bring their pets to Hawaii faced a four-month quarantine for the animals - and they had to pay for it. 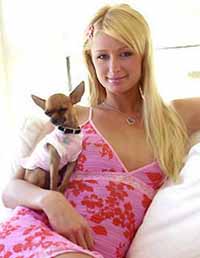 But the rules changed in 2003, making it easier to avoid quarantine as long as other requirements are met to ensure that the animals are free of rabies.

As a result, arrivals of cats and dogs to the islands are up over 30 percent in three years, and hotels are responding to the trend by offering amenities for traveling pets.

The hotel services, most of which are geared to dog-owners, are great for visitors from out of state, but they also benefit locals who want to vacation with their dogs in Hawaii, or who want to take their pets back and forth to the mainland.

Elizabeth Taylor and Cameron Diaz are two of the higher-profile pet-owners who have taken advantage of doggie services at The Kahala, one of Oahu's most luxurious hotels. But Larry and Valerie Wilson, who live in Hawaii, also got to experience the pet program on a recent stay at The Kahala when their pet bichon frise, Kea, was greeted by name by the bellman. The fluffy white dog was then escorted to his room, where fresh-baked peanut butter biscuits with "Kea" inscribed on top awaited.

"It's always been a hassle when we want a nice weekend away, and need to find a doggie-sitter," said Valerie Wilson, a government worker from Aiea. "He's like our child and we always want to bring him."

Nearly 9,000 dogs and cats arrived in Hawaii last fiscal year, up from about 7,650 in 2005 and just over 6,800 in 2004, according to the state Department of Agriculture. Already more than 5,600 have come to the islands in the first seven months of this fiscal year, while just 311 went through the 120-day quarantine.

But even the new rules involve expensive, complicated preparations that require pet-owners to plan months in advance of their trips.

Animals entering the state must have two rabies vaccinations at least three months apart; an implanted microchip (for identification); and a rabies blood test performed at least 120 days before arrival in Hawaii. The blood sample must be sent to a lab at Kansas State University for testing (or for military personnel moving to Hawaii, to a Department of Defense lab in Texas).

It is pet owners who make a sudden move to the islands or who fail to research the requirements whose animals end up in quarantine for the 120 days, said Dr. Isaac Maeda, a veterinarian and manager of the animal quarantine station. Quarantine for animals began in 1912 when rabies became endemic in California.

"Even the dogs want to be pampered," said Lee. "It's all a matter of service."

The Kahala, 10 minutes outside Waikiki in one of the richest neighborhoods on Oahu, charges $150 (EUR111) per pet. The hotel also offers dog-walking, pet pillows alongside guest beds, and a card that guests can use to teach their dogs commands in Hawaiian. "Noho," for example, is sit. The Sheraton Princess Kaiulani in Waikiki and Four Seasons Resort Maui also allow small pets as extra amenities to attract visitors to their upscale hotels. Several bed and breakfasts, vacation homes and Harbor Shores Apartment Hotel in Aiea welcome pets.

Upon arrival, they get special water bowls, pet-size beds and goodie bags packed with a rawhide treat or chew toy.

"It makes the experience for pets just like it is for humans," said general manager Lyle Takeuchi.