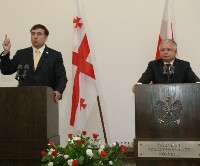 Ex-Soviet Georgia is engaged in a dialogue with NATO, part of a series of steps that must be taken before being invited to join the military alliance.

Speaking at a joint news conference with his Georgian counterpart Mikhail Saakashvili during his first official trip to Georgia, Kaczynski said Tbilisi could receive a formal invitation in 2008.

He invited Saakashvili to take part in an energy forum that is to take place in Poland in May.

Since coming to power in 2003, Saakashvili has vowed to get the small Caucasus nation both NATO and European Union membership plans that have irritated Russia, which has traditionally regarded Georgia as part of its sphere of influence.

Further straining Georgia's efforts to join the military alliance are two breakaway provinces, Abkhazia and South Ossetia, which Saakashvili has promised to bring back under central government control. Russia has close ties with the separatist governments there, although it does not formally recognize them.

Poland, one of NATO's newest members has together with other former Warsaw Pact countries supported Georgia and another ex-Soviet republic, Ukraine, in their efforts to join NATO, appearing eager for a friendly buffer between them and the resurgent Russia.