His 80th birthday Pope Benedict XVI marked by lunching with cardinals and attending a concert - a relatively low-key celebration in line with the quiet pace of a "short" papacy. 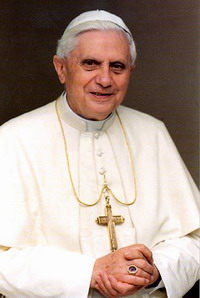 Benedict spent the morning meeting with well-wishers from his native Germany, including the governors of Bavaria and Schleswig-Holstein, and a representative of Ecumenical Patriarch Bartholomew I, the spiritual leader of the world's Orthodox Christians.

Gifts poured in, including 80 bottles of Bavarian beer from the archdiocese of Munich, a birthday cake from some seminarians in Rome, and a giant stuffed teddy bear, which the pontiff donated to a local children's hospital.

"The pope said explicitly that he would prefer not to accept personal gifts, but that anyone who wanted to give him a gift could make a donation that he could then use, for example for the Holy Land, or for other areas of crisis in the world or for Africa," the pontiff's secretary, Monsignor Georg Ganswein, told Vatican Radio.

Benedict's only public celebration came a day earlier, when he celebrated Mass on the steps of St. Peter's Basilica and noted the "not brief period of my existence" in his homily.

The Vatican post office, however, was not letting the birthday pass unnoticed, issuing a special postcard and postmark.

The Vatican generally does not give out information about the pope's health, citing his privacy. Except for an occasional cough, though, the pope appears healthy and robust and in two years has never skipped a planned event for health reasons.

Nevertheless, the passing of the milestone - he is now five years older than the normal mandatory retirement age for bishops - raised questions about the future of the papacy.

Benedict himself has said that being pope is "really tiring" and, in an interview with German television last August, said he does not feel strong enough to take many long trips.

When Pope John Paul II was in his later years and clearly suffering from Parkinson's disease, the former Cardinal Joseph Ratzinger once suggested that there might come a time when popes have to retire.

In a February 2004 interview with the Italian religious affairs weekly Famiglia Cristiana, Ratzinger said he would not rule out term limits for popes because they are living longer now than ever before.

"The pope is selected for life because he is a father and his paternity goes before his function," Ratzinger was quoted then as saying. "Perhaps in the future, with life being prolonged, one also would consider new norms."

He said that at the time, with John Paul still in the papacy, he did not think it was a current issue.

However, a year later after his election as pope, Benedict himself predicted to the cardinals who elected him that his would be a "short reign." And at the time of his election, his brother Georg expressed concern about the toll the job would take on him.

But Benedict has kept the pace slow, limiting his foreign and domestic travel and cutting back on ceremonial and bureaucratic appearances. A trained pianist and music afficionado, however, he does attend concerts given in his honor, including one Monday evening at the Vatican.

Benedict does have some taxing travel coming up, including a May 9-14 trip to Brazil - his first visit to the Americas.

And he has some expected documents in the works, including a letter to Catholics in China and a document expected to liberalize the use of the old Latin Mass, as well as the second volume of a book on the life of Jesus Christ. Volume one came out on Monday.

In the pope's Bavarian birthplace, Marktl am Inn, some 300 people gathered for prayers in front of the house where he was born at 4.15 a.m. (0215 GMT), marking the exact time of his birth.

Residents then processed by candlelight to St. Oswald's Church, where the faithful crossed themselves with water from the font where the future pontiff was baptized.

Later Monday morning, 600 children from the region sang a birthday serenade for Benedict and released hundreds of colored balloons. The square in front of the house where he was born was being renamed Pope Benedict XVI Square on Monday evening.