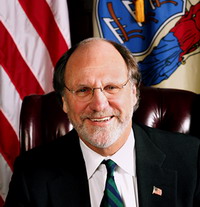 The New Jersey's governor is still in the critical condition after the auto crash and it seems that he faces the third operation on his leg.

Doctors at Cooper University Hospital said the surgery scheduled for Monday on John S. Corzine will be similar to one they performed Saturday, when they cleaned a 6-inch (15-centimeter) wound in his left thigh. On Sunday, he underwent a procedure to remove fluid that had collected outside his left lung.

Corzine was injured Thursday when the sport utility vehicle he was riding in crashed on a highway just north of Atlantic City.

The SUV, which was being driven by a state trooper, was hit by another vehicle that swerved to avoid a pickup truck, sending the governor's vehicle into a guard rail.

Corzine had been on his way to a meeting at his mansion in Princeton between radio host Don Imus and the Rutgers University women's basketball team. Imus was fired last week after using a racial slur to describe the predominantly black team members.

The 60-year-old Corzine - who apparently was not wearing his seat belt in the front passenger's seat - also broke 12 ribs, his breastbone and suffered a broken collarbone. He also had a head laceration and a minor fracture on a lower vertebra.

Corzine remains in critical condition and on a ventilator. However, family members said he recognized them and responded to visitors when they saw him Sunday.

His staff has said that messages have poured in from around the United States, and that the ambassadors of China and Japan, where Corzine visited last May on a trade mission, also sent get-well messages.