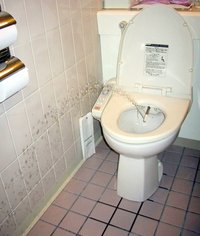 The electric bidet accessory of Toto's Z series caught fire in three separate incidents between March 2006 and March 2007, according to company spokeswoman Emi Tanaka. The bidet sent up smoke in 26 other incidents, the company said.

"Fortunately, nobody was using the toilets when the fire broke out and there were no injuries," Tanaka said. "The fire would have been just under your buttocks."

Toto will repair for free 180,000 toilet units manufactured between May 1996 and December 2001, she said. A manufacturing defect is thought to have led to the faulty wiring.

Toto has been a pioneer in high-tech toilets fitted with pressurized water sprayers - a standard fixture in Japanese homes.

The popular Z series features a pulsating massage spray, a power dryer, built-in-the-bowl deodorizing filter, the "Tornado Wash" flush and a lid that opens and closes automatically. Prices range from 200,500-310,500 yen (US$1,680-2,600).

The model is not sold overseas.