Malaysia accused Western activists Monday of trying to undermine the palm oil industry by claiming that orangutans are threatened by the clearing of forests in Malaysia and Indonesia. 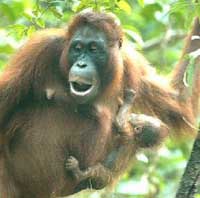 "It's not true," Najib was quoted as saying by Bernama. "There is another motive, which is to hurt the interest of the oil palm industry. That is the real intention."

Najib's aides could not immediately be reached to confirm the comments.

Over the past two years, environment and consumer advocacy groups in the United States and Europe have increasingly warned that the palm oil sector in Malaysia and neighboring Indonesia is destroying large tracts of forests and encroaching on the habitats of endangered species.

A recent United Nations report, "The Last Stand of the Orang Utan: State of Emergency," said oil palm plantations are expanding so rapidly in the rainforests of Indonesia and Malaysia that almost no virgin forest will remain by 2022.

If that happens, the orangutan could be virtually extinct within five years, the report said, adding that plantations have replaced illegal logging and fires as the primary cause of deforestation.

Palm oil mixed with diesel or ethanol made from palm has been touted by some as an ideal biofuel alternative to traditional fuel. But international debate over its possible environmental benefits has intensified, with a few companies putting off plans to use palm oil.

Malaysian officials have insisted that most palm oil plantations are established on land where forests had already been cleared to cultivate crops such as rubber.

Najib said Malaysia maintains sanctuaries dedicated to orangutan conservation, stressing that the clearing of forests was conducted according to sustainable principles.

"In terms of our forest cover, including permanent forest reserves, the areas ... are still sizable," Bernama quoted him as saying. "Comparatively speaking, in terms of international practice, Malaysia is among the best, far better than many European countries."