Madonna arrives in Malawi but has no adoption plans

Madonna flew into Malawi on a silver jet Monday to continue her charity work in the impoverished southern African country, bringing along the Malawian boy she is in the process of adopting. 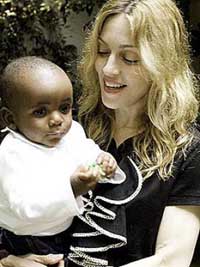 Madonna arrives in Malawi but has no adoption plans

Police kept journalists at a distance, and a large white truck was positioned to obscure the view of photographers. However, a small child who looked like David Banda - the Malawian toddler the star is adopting - was seen being carried down the steps of the jet, and a child's seat was fixed into the waiting sports utility vehicle. Madonna followed, her golden hair blowing in the wind.

Her three-vehicle motorcade then drove off at top speed, followed by journalists.

Madonna visited Malawi last fall and took custody of David, who was in an orphanage after the death of his mother. The move sparked an international controversy and raised concerns that regulations were being swept aside to benefit a pop star who has been generous to the country.

The star, who maintains she has followed the law, said that when she initiated the adoption of David, she was "saving a life."

"There's over a million orphans in Malawi, and in my opinion the laws need to change because these children need to be rescued," the singer told David Letterman on CBS's "Late Show."

Malawian child welfare officials are expected to file a report on the suitability of Madonna and her husband, Guy Ritchie, as adoptive parents after two trips to their London residence in May and December.

In the days before her current trip, the grass was cut and hedges trimmed at the airport, the orphanages and care centers she has been involved with were painted, and security around the exclusive lodge where the star stayed last year was tightened.

Rumors that the celebrity was to adopt another child have been strongly denied.

Madonna's New York-based publicist Liz Rosenberg said the star was going to Africa to continue her work with her Raising Malawi organization.

"She is overseeing the building of a children's health care center. She is absolutely not adopting another baby," Rosenberg said in a statement.

Yacinta Chapomba, a director of local aid group Consol Homes, which has been involved with Madonna's organization in the building of a children's care center, said an official opening ceremony would be held at the center on Monday. She could not confirm whether the star would attend.

The center in the impoverished village of Mphandula, 50 kilometers (30 miles) outside the capital, Lilongwe, will initially house 400 children who lost their parents to AIDS.

There has also been much activity at the Home of Hope orphanage where David was cared for. The road to the village of Mchinji have been graded, new flowers planted and the children have received new uniforms. Three local police officers have been posted at the orphanage.

Madonna, 48, and her filmmaker husband Guy Ritchie were granted an interim court order on Oct. 12 allowing them to take initial custody of then 14-month-old David. The singer has two other children, Lourdes, 9, and Rocco, 6.

Malawi regulations stipulate that prospective parents undergo an 18-to-24 month assessment period in Malawi, but Madonna was allowed to take the boy to her London home soon after receiving the interim order.

Yohane Banda, who has since remarried, surrendered his son to the orphanage after his wife died of childbirth complications. The couple's two other sons died in infancy from malaria.

After initial confusion, Banda has said he wanted David to stay with Madonna and Ritchie, saying he was too poor to raise him.

The road to Banda's village on the Zambian border has also been cleared, but it was unclear whether Madonna would visit him.

Madonna's organization aims to provide food, education and shelter for up to 4,000 children, is based on Kabbalah, Judaism's mystical sect, which counts the singer among its devotees.

Malawi is among the poorest countries in the world, with rampant disease and hunger, aggravated by periodic droughts and crop failure. Just over 14 percent of the 12 million population are infected with HIV, the virus that causes AIDS, and an estimated 1 million children have been orphaned. In many villages, grandparents or older siblings struggle to feed orphans.