As siren sounds in Israel, millions pause to pay respect to Holocaust victims

Sirens sounded across Israel on Monday morning, bringing life to a standstill as millions of Israelis observed a moment of silence to honor the memory of the victims of the Holocaust. 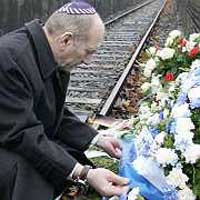 As siren sounds in Israel, millions pause to pay respect to Holocaust victims

The two-minute siren at 10 a.m. (0700 GMT) is an annual tradition marking Israel's Holocaust remembrance day, which began Sunday evening and ends at sundown Monday. Pedestrians froze in their tracks, buses stopped on busy streets, and cars on major highways pulled over as the country paused to pay respect to the 6 million Jews killed by the Nazis.

All day, television stations devoted their broadcasts to historical documentaries and movies, and radio stations played somber music and interviews with survivors.

"The renewal of the Jewish people, its shaking off the ashes of the Holocaust for a new life and national rebirth in its historic birthplace, is the pinnacle of its victory," he said.

Sunday's ceremony threatened to cause a diplomatic flap between Israel and the Vatican, after the Roman Catholic church's envoy to Israel said he would boycott the event because of a caption at the museum describing the wartime conduct of Pope Pius XII.

But hours before the ceremony, Monsignor Antonio Franco reversed his decision, averting what could have been a blow to a fragile relationship.

Israel and the Vatican established diplomatic relations in 1993, after hundreds of years of painful relations between Catholicism and Judaism. Though ties have warmed considerably in recent years, many sensitive issues remain unresolved, including the Vatican's actions during the Nazi genocide.

The caption next to the picture of Pius in Yad Vashem's museum reads, "even when reports about the murder of Jews reached the Vatican, the pope did not protest," refusing to sign a 1942 Allied condemnation of the massacre of Jews.

Pius "maintained his neutral position" with two exceptions, the caption says, criticizing "his silence and absence of guidelines." The exceptions were appeals to the rulers of Hungary and Slovakia toward the end of the war.

"Yad Vashem believes that it was inappropriate to link an issue of historical research with commemoration of the victims of the Holocaust," she said.

The disputed photo caption first appeared in 2005, when Yad Vashem opened its new museum. Shortly after, the previous Vatican ambassador asked that the caption be changed.

Yad Vashem has not done so, insisting its research on the pope's role was accurate.

Yad Vashem said it would be ready to re-examine Pius XII's conduct during the Holocaust if the Vatican opened its World War II-era archives to the museum's research staff and new material emerged. Despite frequent requests from Holocaust researchers, the Vatican has denied access to major parts of its archives, including wartime papers.

The Vatican has struggled to defend its wartime pope as it pushes his sainthood cause, insisting that Pius spearheaded discreet diplomacy that saved thousands of Jews.