The ruling party took a commanding lead in Nigeria's state elections and authorities reported that 21 people died during the vote, which a main opposition party dismissed as fraudulent. 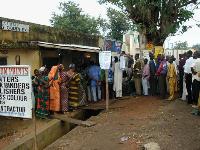 Saturday's chaotic elections for state lawmakers and governors present a challenge for Nigeria before a crucial April 21 presidential vote. That election should set up the country's first-ever handover of power between elected civilians and if the populace rejects it, Nigeria's democratic experiment could be imperiled.

"Virtually everywhere, the elections were a sham," said Lai Mohammed, a spokesman for the Action Congress party of Vice President Atiku Abubakar, a staunch political foe of the president. "We are not going to accept these results."

Abubakar fell out with Obasanjo last year after he helped quash a drive by the president's supporters to amend the constitution and allow a third elected term for Obasanjo, whose 1999 election ended decades of near-constant military rule.

Abubakar was subsequently barred from the race by the electoral commission, which based its decision on findings by an executive panel that Abubakar stole government funds.

He denies the allegations and has launched legal proceedings to rejoin the race. The Supreme Court is to give its ruling Monday.

On Sunday, Police Inspector General Sunday Ehindero told state television that police were still working through their case load after Saturday's vote, but that a preliminary tally showed 21 dead and 218 arrests.

Nigeria's private daily newspapers reported that between 41 and 52 died.

Most of Saturday's deaths came in fights between supporters of rival political parties or during attempts to steal ballot boxes or otherwise skew the outcome of the vote, according to the papers' reports.

There were no reports of killings by security forces. Previous elections have seen roughly similar levels of violence.

Ehindero called for calm and said losers in the vote should follow due process and "eschew violence."

Scattered small-scale protests and burned buildings aside, no major violence was reported on Sunday.

First results showed Obasanjo's ruling party winning 10 out of 36 states, including oil-rich Rivers state, where an Associated Press reporter witnessed electoral officials stuffing ballot boxes, balloting centers that stayed shut all day and few voters at those that did open.

The electoral commission reported turnout of nearly 90 percent in handing the ruling party a win with similar levels in Rivers state.

The official who released the results in the state capital, Port Harcourt, did not take an AP reporter's questions.

Businessman Steven Amakiri, 42, was stunned by the announcement.

"That is not true, how can they say that? There was no election," he said.

Voting unfolded relatively peacefully Saturday in most of the country, although many voters waited for hours in front of polling stations that opened late with faulty voter-registration rolls. In some areas, like in Rivers state, ballot-box stuffing and other irregularities were clearly visible.

Since its independence from Britain in 1960, Nigeria has never seen power handed from one elected leader to another. The April 21 vote will be closely watched by Nigeria's 61 million voters, looking to see if that election is similarly troubled.

Obasanjo's 1999 election ended 15 years of near-constant military rule and decades of coups d'etat that overturned periodic civilian administrations. His 2003 re-election was marred by violence and accusations of widespread rigging. All previous elections were scuttled by military coups or annulments.