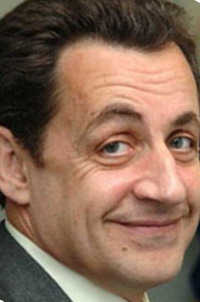 If there is some shoo-in for the French presidency, is that Nicolas Sarkozy?

A Socialist former prime minister fears as much, and is urging Sarkozy's major rivals to unite in a nearly unthinkable alliance to keep the front-running conservative party candidate out of the Elysee Palace.

Whoever wins, the two-round vote on April 22 and May 6 will lead to change in France, after 12 years under President Jacques Chirac marked by lackluster economic progress and troubles integrating Arab and black youths. Chirac is not running this time.

Sarkozy, a hard-charging and divisive former interior minister who has called for a break with the past, has led polls since he was named candidate for Chirac's party in January. Surveys suggest that he would face Socialist Segolene Royal in the runoff - and would beat her.

But there's a wild card: centrist Francois Bayrou, who has risen in polls in recent weeks and is now snapping at Royal's heels. If Bayrou makes the runoff, polls indicate he would beat Sarkozy.

Based on that electoral calculus, Socialist former Prime Minister Michel Rocard said he wants Bayrou and Royal to join forces to keep Sarkozy out of the presidency.

"I therefore call on Francois Bayrou and Segolene Royal to, before the first round, tell the French people that they set themselves on the way toward this alliance," Rocard wrote in Le Monde.

"This is the chance for France," he added.

The suggestion highlights how tense and tight this race has been. With just nine days before the first round, many voters remain undecided.

The comments from Rocard, a European parliament lawmaker who was French prime minister from 1988 to 1991, amounted to an admission that Royal cannot win on her own against Sarkozy.

On a campaign stop in eastern France, Royal brushed off Rocard's recommendation, saying she was focusing on "the real questions" in this campaign. Her campaign director declined to comment.

A jubilant Bayrou hailed the proposal as "very important news."

Rocard was apparently seeking to tap into a "tout sauf Sarkozy" ("anything but Sarkozy") movement that has exposed deep divisions in French society. Sarkozy has made many enemies in his lifelong drive for the presidency, and his often brazen attitude and tough measures on immigration and youth crime have made him adored on the right and reviled on the left.

Bayrou, meanwhile, bills himself as a centrist but has traditionally voted with the right. He was education minister in a conservative-led government from 1993 to 1995, when Sarkozy was budget minister.

Rocard, in seeking to link Bayrou to the left, seemed to be putting persona over politics.

Speaking Friday on RTL radio, Rocard said that "for any Socialist, any contribution to the election of Nicolas Sarkozy will require him or her to answer before history."

Parties of the left - Communists, Greens and Trotskyists - have been polling at historically low levels ahead of the election, raising questions about where Royal would get the extra votes she would need for the second round to beat Sarkozy.

Bayrou, by contrast, could harvest his center-right supporters plus most voters on the left, determined to defeat Sarkozy. Bayrou has said he wants to draw the best ideas and advisers from both left and right.

Sarkozy has courted supporters of far-right contender Jean-Marie Le Pen, whose stunning qualification for the runoff in the last presidential race in 2002 has played in many minds in this campaign.

The vitriol continued to flow Friday, with Royal accusing Sarkozy's Union for a Popular Movement party of "secretly negotiating" with Le Pen's camp.

Most polls show Le Pen fourth this year - behind Sarkozy, Royal and Bayrou.

Surveys show most voters are worried about jobs and the economy - spawned by concern that France isn't keeping up with rising powers like China and India and is losing its influence in the world.