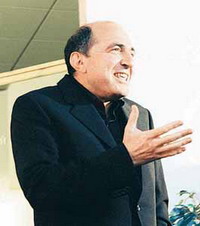 Boris Berezovsky says he has the support in political elite of Russia which will help him to oust Vladimir Putin’s Government. He also called for the use of force for that, Britain's Guardian newspaper reported Friday.

Russian authorities reacted swiftly to the prominent Kremlin foe's statements, saying Berezovsky was abusing his asylum status in Britain and renewing calls for his extradition.

In remarks that appeared aimed to rattle the Kremlin and foment political unrest ahead of crucial elections, the exiled billionaire claimed he was funding influential insiders who are conspiring to take power, according to the Guardian.

Berezovsky - a former Kremlin insider who fell out with Putin and fled to Britain, where he was granted asylum - accused the Russian president of creating a totalitarian regime. In the audio clip, he said that "there is no chance to change that through elections, and (the) only way (is) to use power."

According to the Guardian, Berezovsky claimed to be in contact with unidentified members of Russia's political leadership and had offered them financial aid as well as "my understanding of how it could be done."

He did not identify any individuals or groups, but the Guardian said Berezovsky claimed to be in contact with people inside the Kremlin who were conspiring to mount a palace coup. In the past, Berezovsky has said he has bankrolled opposition forces rather than government insiders.

Berezovsky made similar comments in early 2006, but his Guardian interview comes amid rising tensions ahead of parliamentary elections in December and a presidential vote next March to replace Putin. Under the constitution, Putin is barred from seeking a third consecutive term.

Putin has signed laws that critics say have rolled back democracy and are aimed to ensure the current Kremlin leadership retains power following the presidential election.

Berezovsky's remarks provoked new calls from the Russian government for Britain to extradite the tycoon for prosecution here.

"There is a longstanding request to terminate the situation in which Boris Berezovsky takes advantage of his refugee status, grossly abusing this status, committing actions that, under British legislation, require his extradition," Foreign Minister Sergey Lavrov said.

Prosecutor General Yuri Chaika said he had ordered authorities to open a new criminal case against Berezovsky because the remarks contained "calls for the violent seizure of power," and his spokeswoman Marina Gridneva said prosecutors would once again officially appeal to Britain to hand him over.

Britain granted Berezovsky refugee status in 2003, turning down an earlier Russian extradition request. Russian prosecutors made a renewed effort following his comments last year, but a British judge ruled that he could not be extradited because his asylum status meant he was protected by the Geneva Conventions.

Berezovsky said in another recorded statement on the Guardian's Web site that his efforts to oust the current Kremlin leadership are legal and that he does not fear Russian prosecution. However, he said he fears for the safety of his contacts in Russia, accusing Putin's government of killing those it considers enemies.

Berezovsky said it was unlikely he would be extradited following the mysterious death last November of Alexander Litvinenko, a former KGB officer who was poisoned with a radioactive substance.

On his deathbed, Litvinenko accused Putin of ordering his poisoning but cited no evidence. Russian authorities have denied involvement.

There has been widespread speculation in the West that Litvinenko was killed by Russian agents, acting on their own or with official sanction, possibly as punishment for the relentless criticism of Putin.

Russian news media and officials have repeatedly suggested that Berezovsky could have ordered the poisoning himself, perhaps to discredit Putin and his government. Berezovsky - who once controlled an oil, automobiles and media empire here - gained a reputation for ruthlessness in the 1990s when he became one of Russia's wealthiest tycoons in the chaotic and often violent post-Soviet period.

Communist Party leader Gennady Zyuganov suggested any overthrow attempt by Berezovsky would fail because of widespread distrust of the magnates who made fortunes in the 1990s.

"Berezovsky helped the previous authorities to rob the country, and now he has suddenly become a revolutionary. The people will never follow him," Interfax quoted Zyuganov as saying.