It's Johnnie To vs. Johnnie To at the Hong Kong Film Awards this year. 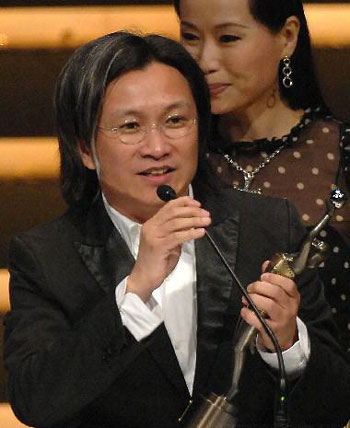 The veteran Hong Kong director will be a formidable opponent at the awards ceremony to be held Sunday, nominated for two films in the best movie and best director categories.

To was rewarded for a prolific but high-quality output this year.

He made "Exiled," the story of a group of gangsters ordered to kill a former colleague, which featured a stylish gunfight played out in between curtains, and "Election 2," a gang story with smart political commentary on China's growing influence in Hong Kong.

To is up against stiff competition, though.

Famed Chinese director Zhang Yimou is armed with his grand imperial drama "Curse of the Golden Flower," and making a comeback after 17 years, and Hong Kong director Patrick Tam is competing with "After This Our Exile," the story of a deadbeat father.

Zhang and Tam are also in contention for best director and both their movies are contending for best film honors.

But perhaps the toughest field is in the best actor category.

On the shortlist are Chow Yun-fat for "Curse of the Golden Flower," action star Jet Li for "Fearless," a biopic of kung fu master Huo Yuanjia, and former Cannes best actor winner Tony Leung Chiu-wai, who was nominated for playing an introverted police officer who seeks revenge in "Confession of Pain."

Completing the list is another heavyweight, pop star Aaron Kwok. Kwok cemented his credentials as a strong actor after winning the best actor prize at Taiwan's Golden Horse Awards - the Chinese-language equivalent of the Oscars - two years in a row. He won last year for his performance as an abusive father in "After This Our Exile."

Also nominated is Hong Kong actor Lau Ching-wan, who portrays a former star actor who mentors a newcomer in "My Name is Fame."

Chinese star Gong Li from "Memoirs of a Geisha" and "Miami Vice" is the strongest candidate in the best actress field, weaker by comparison to the men's competition.

Rising star Isabella Leong is in contention for "Isabella," a moodily shot father-daughter bonding story set in the gambling enclave of Macau. Malaysian Lee Sin-je was nominated for the horror film "Re-cycle."

The other nominees are Rene Liu for the love story "Happy Birthday" and Teresa Mo for "Men Suddenly in Black 2," about a group of wives who go philandering to get back at their husbands.