Koa, an Atlantic bottlenose dophin, will do anything for a fresh fish - including alerting her U.S. Navy handlers to potential terrorists. 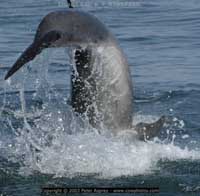 Koa is one of about 100 marine mammals housed at Naval Base Point Loma, located on a scenic peninsula jutting into San Diego Harbor.

Officials at the base briefly opened their doors to the media Thursday for the first time since the start of the war in Iraq. The demonstration came a few weeks after the Navy announced plans to ship up to 30 dolphins and sea lions to patrol the waters of Washington state's Naval Base Kitsap-Bangor, which is home to nuclear submarines, ships and laboratories.

Even in today's high-tech world of underwater robotics and unmanned vehicles, the Navy says animals like Koa are its best line of defense against attacks from the sea.

"Biologically, they are better than anything we have ever made," said Mike Rothe, head of science for the Navy's marine mammal program.

About 75 dolphins and 25 sea lions are in the program. Both species can find mines and swimmers in murky waters. Working in unison, the dolphins are trained to drop a flashing light by the target, while sea lions can attach a tether to it.

About 200 technicians, trainers and other staff care for the animals. Petty Officer 2nd Class Christopher Dallaglio said all the dolphins had different personalities and seemed to enjoy their work. He helps look after Ten, a 24-year-old Atlantic bottlenose.

"When she was born, she was perfect, and she's perfect still," he said. "She's a real sweetheart."

The Navy's sea mammal program started in the late 1950s and grew to comprise 140 animals during the Cold War. Dolphins helped protect a pier in the Vietnam War. A veteran from that conflict, a dolphin nearing 50 years of age, still lives in San Diego at the naval base.

The last time the marine mammals were deployed overseas was in the Iraqi harbor of Umm Qasr in 2003, where they located underwater mines and cleared a path for Marines to land. They also were used in San Diego in 1996 when they patrolled the bay during the Republican Party's national convention.

Rogue swimmers planting bombs pose a real threat, said Cmdr. Jon Wood, who deployed to Iraq with the mammals. He said there were several cases of insurgent forces laying charges on floating objects in Vietnam.

The Greenpeace ship Rainbow Warrior was sunk in 1985 in Auckland Harbor, New Zealand, after saboteurs planted limpet mines on its hull shortly before it was to sail to protest France's nuclear tests in the South Pacific. Two French spies were convicted in the bombing which killed one person.

By the late 1990s, U.S. Navy officials began phasing out the program, expecting technology to take over. But that still has not happened and the dolphins and sea lions will be used until at least 2012.

In response to questions about whether the animals have been trained to attack, officials said no.

"We have never trained any Navy marine mammals to do any harming, attacking or stabbing," Navy spokesman Tom LaPuzza said. "We have never done anything like that, and we never will."

Animal rights activists are resisting Navy plans to ship the dolphins and sea lions to Washington state. They worry that waters in the region, which are about 10 degrees Fahrenheit (6 degrees Celsius) cooler than in San Diego Harbor, could put stress on the animals. They also are concerned diseases could be transmitted to the area's native orca population.

"There are no bottlenose dolphins in these waters for a reason and I would say it's because it's too darn cold," said Seattle-area marine biologist Toni Frohoff.

Protesters showed up at public meetings held by the Navy in the Seattle area to discuss the Navy's plan. Several of them knitted woolly hats and sailor uniforms for the animals as a way of drawing attention to the issue - costumes that could never actually be worn.

Dr. Stephanie Wong, a military veterinarian, said the dolphins are closely monitored for any signs of disease.

The Navy's plan to ship marine mammals to Washington state is still in its early stages. Officials aim to complete an environmental impact report by the fall.