Clinton to propose her ideas for US government reform

Presidential candidate Sen. Hillary Rodham Clinton is to offer details Friday of her plan to rebuild "the competence of government and the confidence of the American people," saying she wants to streamline the functions of the federal government and boost its accountability to taxpayers. 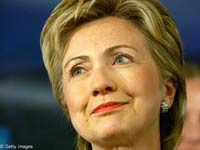 Clinton to propose her ideas for US government reform

The Democratic presidential front-runner was to speak about her plan for government reform in a speech Friday at St. Anselm College in Manchester, New Hampshire. She was expected to propose cutting 500,000 government contractors for a savings of up to $18 billion (EUR13 billion) a year.

In an interview with The Associated Press, Clinton said the government needed to become more consumer-friendly, cost-efficient and transparent in the way it does business.

"We have to bring the government into the 21st century," she said. "We expect to be able to go to an ATM machine, stick a card in and get money, but we can't figure out how to get medical records from the Department of Defense over to the VA (Veterans Affairs). It makes no sense."

Among other things, Clinton said she would propose a Web site that would track the effectiveness of government agencies and start a "corporate subsidy information service" to determine whether such subsidies benefited citizens and not just the corporations that receive them.

She said she would limit the Bush administration practice of hiring private companies to perform government functions and would work to boost the performance of key agencies, such as the Federal Emergency Management Agency, which she said performed well during her husband's White House years.

"People are rightly disturbed by what they see as the incompetence and corruption in this administration. And that's undermined confidence in government, which makes it very difficult for us to meet the challenges we face today," Clinton said.

Her proposals echoed "Reinventing Government," or REGO, a program launched during her husband's administration and run by Vice President Al Gore. REGO was credited with saving taxpayers more than $136 billion over eight years by cutting the federal work force, trimming layers of management and cutting subsidies for items like mohair and wool.