Estonian lawmakers adopted an amendment to the constitution aimed at protecting and preserving the Baltic country's language. 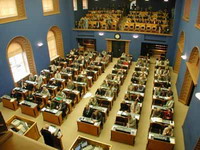 The 101-seat Riigikogu, or parliament, overwhelmingly passed a change to the preamble of the constitution to "stress the role of Estonian language as the supporter of Estonian culture and barer of national identity," spokeswoman Margit Liivoja said in a statement.

The amendment was approved by 93 lawmakers, with the rest abstaining or absent.

Education Minister Tonis Lukas hailed the decision, saying the amendment was an important tool for the preservation of the Estonian language, spoken by only about 1 million people worldwide.

"In a global context, the Estonian language is like a feather," Lukas said. "If we don't take care of it properly, it will simply vanish one day."

Lawmakers and officials have expressed concern over the survival of Estonian, which together with Finnish and Hungarian belongs to the Finno-Ugric language family.

Up to 25 million people are estimated to speak Finno-Ugric languages, with several subgroups living in Russia.

Roughly one-third of Estonia's population of 1.3 million are native Russian-speakers, a heritage deriving mainly from the nearly 50 years of Soviet occupation that ended with the Baltic nation's independence in 1991.