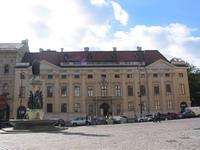 Vienna authorities said Thursday they hope the DNA tests and fingerprint analysis will help finding those who stole the Faberge eggs,expensive vases and paintings from the Vienna palace.

Police Maj. Manfred Briegl of Vienna's criminal investigations division told reporters that police still had no leads in the theft, which was discovered Wednesday afternoon at the Palais Harrach, a Baroque-era mansion that now houses offices and shops.

Briegl said detectives dusted for fingerprints and collected possible traces of the thieves for DNA analysis in their effort to recover the 30 Faberge eggs, 20 porcelain vases and a painting, and that results were expected within a week.

Gerald Hesztera, spokesman for the Federal Criminal Investigations Bureau said Vienna police gave Interpol a detailed list of the stolen items in case they surface in auctions or black markets outside Austria.

Police said the works were stolen sometime between Tuesday evening and Wednesday morning by thieves who broke through a rear entrance and apparently loaded the items into a waiting vehicle.

Werner Mayer, an official with the UNIQA insurance company, told Austrian television the building was not fitted with an alarm system and suggested the insurer was, therefor, not legally obligated to cover the theft.