Engagement predicted for Danish prince; palace says it knows nothing of it

Two Danish magazines on Thursday predicted that the divorced Prince Joachim would soon be engaged to Frenchwoman Marie Cavallier, who spent Easter with the royal family. 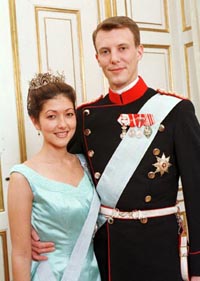 Engagement predicted for Danish prince; palace says it knows nothing of it

The palace, however, denied any knowledge of such a plan by Joachim, Queen Margrethe's second son, who was divorced from Hong Kong-born Princess Alexandra in 2005.

"We have no knowledge of any such upcoming event," said palace spokeswoman Lis M. Frederiksen, who confirmed the 31-year-old Cavallier had been with the Danish royals for the holiday.

Henrik Qvortrup, chief editor of the magazine Se og Hoer, said the fact that Cavallier spend the holiday with the royals was "an expression of some kind of approval." An engagement "is coming soon. We're very sure," he said.

In recent months, Joachim and Cavallier who met in 2005, have appeared openly as a couple.

The 37-year-old prince's divorce was the first split in Europe's oldest monarchy in nearly 160 years. Joachim and Alexandra have two children, 3-year-old Felix and 7-year-old Nikolai. Alexandra, 42, gave up her royal title on March 3 when she married a Dane.

Joachim is third in the line to Denmark's throne after his brother Crown Prince Frederik and Frederik's son, Prince Christian.