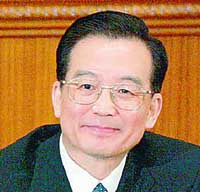 Wen - the first Chinese leader to address the parliament in 22 years - was on a three-day "ice-melting" trip to Japan as the two countries worked to reverse a deterioration in ties caused in part by disagreements about the past.

The Chinese premier, who spent part of Thursday urging Japanese business leaders to invest in China, also struck a conciliatory note, acknowledging Japanese apologies and blaming a clique of militarists for Tokyo's invasions of China.

"To reflect on history is not to dwell on hard feelings but to remember and learn from the past in order to open a better future," he said, adding, however, that he hoped Japan's apologies would be "turned into actions."

The two countries have been at odds in recent years over Japan's invasions and occupation of China in the 1930s and '40s. China has accused Japan of not fully atoning for its aggression, while some Japanese feel accounts of their wrongdoings have been exaggerated.

The Wen trip was aimed at building on an improvement in ties begun when Japanese Prime Minister Shinzo Abe traveled to China in October. Ties had plunged to postwar lows during the 2001-2006 term of his predecessor, Junichiro Koizumi.

Japanese officials said they were satisfied so far with the visit, which was to end Friday.

"Premier Wen Jiabao's speech was very positive, and I thought it was very good that forward-looking remarks were made on broad-ranging issues," Chief Cabinet Secretary Yasuhisa Shiozaki said.

On Wednesday, Wen and Abe declared their firm intentions to move forward on rebuilding relations, signed agreements on energy and the environment, and issued a joint statement that laid out a series of issues for the countries to cooperate on.

Wen also strove to put a human face on the Chinese government, coming out early Thursday for a jog at a Tokyo park - in sportswear with a Beijing 2008 Olympics logo - and even joining a group doing tai chi. On Friday, he was to play baseball with college students in western Japan.

Much of Wen's activities on Thursday and Friday were aimed at business relations. China, including Hong Kong, is Japan's No. 1 trading partner, and Beijing is eager to increase Japanese technology transfers and investment in its booming economy.

After the parliament speech, Wen lunched with members of Japan's leading business federation, declaring that "winter has past, and spring has come in China-Japan relations."

"China must build a society that conserves its resources and protects its environment," Wen said.

The two companies also agreed on joint development of oil and natural gas overseas and technology exchange in oil refining, the report said.

Wen also made a number of statements on issues close to Japanese hearts.

On Wednesday, he expressed understanding for Japan's drive to win a resolution of North Korea's past kidnappings of Japanese citizens. On Thursday, he alluded to Tokyo's long-standing campaign to win a permanent seat on the U.N. Security Council - a campaign China has blocked in the past.

"China understands Japan's hope to play a bigger role in international society, and we are ready to strengthen our mutual understanding over the United Nations' reforms," he said.

Wen, however, also warned the Japanese not to meddle in Beijing's relations with Taiwan, which it considers part of China. The premier said China hoped for peaceful reunification, but that it could not tolerate Taiwanese independence.