Senators are pressuring top U.S. diplomat use the unusual visit to Libya to confront the country's leaders over its terrorism. 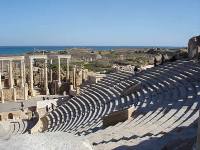 The main focus of Deputy Secretary of State John Negroponte's 10-day, four-nation trip to Africa is supposed to be the continuing crisis in Sudan's Darfur region. The tour, beginning Wednesday, will include Libya and make Negroponte the highest-ranking U.S. diplomat to visit in half a century,

In a letter, seven senators said they want the deputy secretary to demand action from Libyan leader Moammar Gadhafi on unresolved compensation for terrorist acts, especially the 1988 Lockerbie bombing of Pan Am 103. It was not yet clear whether Negroponte will meet with Gadhafi.

The senators who include Democratic presidential candidates Hillary Rodham Clinton and Christopher Dodd and one Republican, Norm Coleman say Negroponte must push for a full Libyan accounting of past misdeeds, including a 1986 Berlin disco bombing that killed two U.S. troops.

Without such steps, Congress will resist full normalization of ties with Tripoli, which has had better relations with Washington since renouncing weapons of mass destruction and agreeing to settle claims by the families of the 270 Lockerbie victims, they said.

"While we fully understand that Darfur is the primary topic of your visit, we implore you to remember that there are other vital American concerns that should be addressed," they wrote in a letter to Negroponte, pointing directly to Libya.

"We urge you to use the opportunity your visit presents to send a strong message to (Gadhafi) that he must settle the remaining terrorism cases against his country before he can have fully normalized diplomatic relations with the United States," they said.

Unless the cases are settled, the State Department can expect "significant congressional concern" on requests for a new embassy in Tripoli, aid for Libya and Senate confirmation of an ambassador for the country, they said.

The letter was released by Democratic Sen. Frank Lautenberg, who organized the petition and has offered a Senate resolution urging the United States not to accept the credentials of a Libyan ambassador until the cases are resolved.

Negroponte, who was beginning his trip Wednesday, will be the highest-ranking U.S. diplomat to visit Libya since then-Secretary of State John Foster Dulles traveled there in 1953. The State Department has not released details of Negroponte's itinerary in Sudan, Chad, Libya and Mauritania, and it is not yet clear if he will meet Gadhafi while in Tripoli.

State Department spokesman Sean McCormack would not discuss the senators' letter on Wednesday but noted a "quantum difference" in U.S.-Libyan relations since 2003, when it announced it had abandoned its weapons of mass destruction programs.

"There are still some steps left to be resolved on the Libyan side as well as the U.S. side but it's a fundamentally different relationship," he told reporters.