President Viktor Yushchenko is willing to freeze his order to dissolve parliament, a chief aide said Wednesday, in what appeared to be a major concession aimed at resolving Ukraine's political crisis. 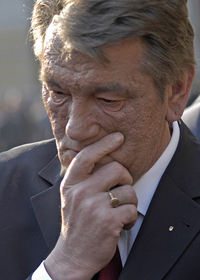 Yushchenko accuses Yanukovych and his allies of trying to usurp power. Yanukovych in turn contends that Yushchenko's order was unconstitutional.

The Constitutional Court postponed its first hearing on the matter until next week - and with the prospect of a quick decision fading, both sides appeared willing to give some ground.

Yanukovych, who had previously demanded the order be canceled, appealed to Yushchenko on Wednesday to freeze it.

"The president ... has sent a message that his decree can be halted," said Vitaliy Hayduk, secretary of Yushchenko's security council.

Under such a freeze, the parliament apparently would continue working, but a date for early elections would be negotiated. Yushchenko had called for elections on May 27 - just 14 months after the elections in which Yanukovych's party won the largest share of votes.

The election eventually led to Yanukovych regaining the premiership, which he lost after massive demonstrations in 2004 that helped propel Yushchenko into power. The demonstrations, which became known as the Orange Revolution, broke out after Yanukovych was declared to have beaten Yushchenko in a fraud-riddled presidential election; the Supreme Court invalidated the vote and Yushchenko won the rerun.

On Wednesday, several thousand supporters of Yushchenko marched to the Constitutional Court and then back down Kiev's main avenue, chanting "Honest Court! Honest Elections!"

"We must help Yushchenko and Ukraine to stand for the choice that we made during the Orange Revolution," protester Svetlana Rohozhyna said.

"Today we must hold very big rally to force Yushchenko to see a real situation in the country," Yanukovych's supporter Yuriy Pechatov said.

The rallies were significantly smaller than those of 2004, which frequently topped 100,000 people.

Meanwhile, former Polish President Aleksander Kwasniewski, who played mediator during the Orange Revolution, arrived Wednesday in Kiev to meet with Yushchenko and Yanukovych.

During the meeting with Kwasniewski, Yanukovych expressed concern about the situation, saying it could hurt Ukraine as well as its partners, the Cabinet said in a statement.

Yanukovych has called for international mediation, while Yushchenko insists there is no need.