Thousands of people supporting opposition gathered in the main square in Kyrgyzstan capital to make the former Soviet nation's embattled president to resign. 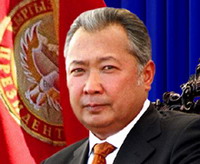 President Kurmanbek Bakiyev sought to head off the opposition protest by signing constitutional amendments curtailing his power Tuesday, but the opposition rejected his move and showed up in full force just two years after demonstrators drove his predecessor from power in the strategically important nation.

Thousands of protesters gathered at seven locations across the capital, Bishkek, and marched to the Ala Too square carrying banners reading, "No to Bakiyev!" and "Reforms without Bakiyev!" Most participants were young and many were armed with massive wooden sticks.

After arriving at the main square, where the president's headquarters is located, protesters set up dozens of traditional yurts. Opposition leaders said the protest would continue until Bakiyev steps down.

Police said they would deploy 3,000 officers to maintain order in Bishkek during opposition rallies.

The prospect of large protracted protests that could throw the country of 5 million people into chaos is a concern to both Washington and Moscow. The United States and Russia each have an air base in Kyrgyzstan.

Developments in Kyrgyzstan, the region's freest country, are crucial for energy-rich Central Asia's future democratic development, as autocrats in neighboring countries have used continuous political instability here as a reason to tighten control.

Bakiyev was elected in July 2005 in voting that was assessed by international observers as the most free and fair in ex-Soviet Central Asia, but his rule over Kyrgyzstan has been plagued by political squabbling and allegations of cronyism and corruption.

The clan-dominated nation also has been divided by historic rivalry between the north and the south. Bakiyev and his entourage come from the south, while many opposition leaders are from the north.

"We are disgusted by Bakiyev's policy," said one of the protesters, 20-year-old Mirlan Ozubekov from the northern Issyk-Kul region. "He only puts the southerners in official jobs."

Bakiyev further angered the opposition in December when he reversed several constitutional amendments and recovered the authority to form the Cabinet. The opposition has since been stepping up pressure on Bakiyev and called for protests just over two years since demonstrators drove his predecessor, President Askar Akayev, out of office.

Bakiyev also accused the opposition of plotting a coup and threatened tough action if the demonstrations jeopardize public security.

Prime Minister Almazbek Atambayev said Tuesday that any attempt by protesters to storm the president's headquarters, which also houses the government, would be put down by force.

According to media reports, shop and market owners - mindful of the massive looting that followed the fall of Akayev's regime two years ago - were taking security precautions ahead of the opposition protests, with some saying they have hired armed guards.