Light flashes across the 82 facets of the Tiffany Diamond, highlighting the brilliance of the giant gem at the Smithsonian's National Museum of Natural History. 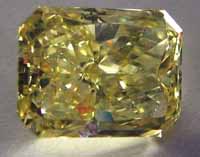 One of the world's largest yellow diamonds, the stone is on loan from Tiffany & Co., from Wednesday through Sept. 23. It joins such famed jewels as the Hope Diamond, Hooker Emerald and Oppenheimer Diamond.

The Tiffany Diamond weighs 128.54 carats and is in a cushion cut. Perched on it is a gem-encrusted bird known as the "Bird on a Rock," designed in the early 1960s by Jean Schlumberger. The bird is gold and platinum with white and yellow diamonds accented by a ruby eye.

"It's the largest diamond on public display in the United States," said Jeffrey E. Post, curator of gems at the museum. It is more than 2Ѕ times the size of the famed Hope Diamond, which weighs in at 45.5 carats.

"It's on summer vacation," Fernanda M. Kellogg, president of the Tiffany & Co. Foundation, said of the loan. The stone is priceless, she said.

It has only been worn twice, once by a Rhode Island socialite and once by actress Audrey Hepburn in a promotion for the film "Breakfast at Tiffany's," Linda Buckley, a Tiffany vice president, said.

Post said displaying the gem is part of a celebration of the foundation's endowment to the museum, which allows the institution to buy gems to fill in its collection.

The Tiffany Diamond's 82 facets are 24 more than a traditional brilliant cut diamond, a step intended to maximize the sparkle - called fire in diamonds.

Discovered in South Africa in 1877, the stone was bought by New York jeweler Charles Tiffany. His gemologist, George Frederick Kunz, studied the gem for a year before beginning to cut it to reduce its size from 287 carats.

Post said in addition to the giant yellow diamond, the museum is also marking its first two acquisitions using the Tiffany endowment.

Now the museum no longer has to wait for gifts, Post said, but can buy gems when they become available.

Joining the collection are a heart-shaped dark green garnet, a very unusual color, Post said. Garnets usually are red, he explained, and this unusual one was found near the Kenya-Tanzania border. In addition the museum has bought a square purple tourmaline from Mozambique. While tourmalines can come in several colors, its deep purple is rare.