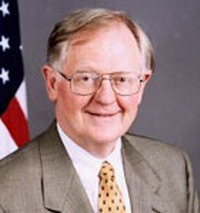 The United State's Ambassador to Poland decided to leave his position later this year.

Victor Ashe, who was mayor of Knoxville for 16 years, told The Knoxville News Sentinel he has given his notice and will probably step down after July 4, the newspaper reported on its Web site Tuesday.

Ashe, 62, has been in Warsaw since the summer of 2004. He did not say what he plans to do once he returns to Knoxville.

Ashe was a college roommate of President George W. Bush at Yale University and protege of former Tennessee Sen. and U.S. Ambassador to Japan Howard Baker. He served nine years in the Tennessee Legislature before losing to Al Gore in 1984 for the U.S. Senate.

Ashe was teaching at Harvard's Kennedy School of Government when Bush nominated him ambassador to Poland.