President Viktor Yushchenko will not dissolve parliament that has thrown the country into political crisis, but was ready to compromise on when new elections would be held. 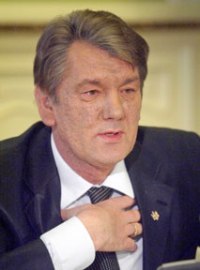 Yushchenko had ordered the dissolution and early elections, saying that Prime Minister Viktor Yanukovych and his parliamentary majority were trying to usurp power. Yanukovych and his allied lawmakers say the order is unconstitutional.

The Constitutional Court had been expected to begin hearings on the issue Wednesday, but unexpectedly announced late Tuesday that the hearings would not begin until April 17.

With no immediate end to the standoff in sight, Yushchenko suggested he was prepared to allow for more time before the elections, which he had called for May 27.

"The date is one of those issues that can be resolved during political negotiations," Yushchenko told a small group of journalists. "The main thing for us is to find a constitutional answer regarding the date so that (the elections) cannot be revised later."

The standoff has become the worst political crisis to seize the nation of 47 million since the Orange Revolution in 2004. Russia, Ukraine's historic partner, and the West, with whom Ukraine has been trying to build closer relations, have both appealed for calm.

The likelihood of the Constitutional Court rendering a decision that would appease both sides appeared increasingly remote Tuesday. Five of the 18 judges recused themselves from participation in the hearings, citing pressure on them from the Yanukovych camp. Later, the chief judge decided to postpone the hearings.

Yushchenko said he remained convinced that the court would eventually rule in his favor, and he called on all sides to accept the decision. Yanukovych has said he would abide by the court's decision, but his party expressed grave concern over the action of the five judges Tuesday.

Yushchenko told journalists that he put forward a 15-point plan to resolve the situation during his talks with Yanukovych on Tuesday. The president refused to specify what the plan consisted of, but said canceling his dissolution order was not an option.

Earlier Tuesday, some 20,000 Yanukovych supporters _ waving party flags and holding portraits of the premier _ protested in Kiev's Independence Square. Yanukovych has seized the initiative with street protests, but they are a dim shadow of the massive numbers that flooded central Kiev during the 2004 Orange Revolution.

In 2004, Yushchenko had called out hundreds of thousands of his supporters to protest against their stolen votes in the bitter presidential race, which Yanukovych won. Ukraine's Supreme Court threw out Yanukovych's victory and ordered another poll, which Yushchenko won.

Yushchenko accused Yanukovych of paying his supporters. "It discredits them," Yushchenko said. "It effects the talks."

Some of Yanukovych's supporters have admitted that they are being paid, but insisted they would have turned out anyway. Halyna Ozhetrushko, of the eastern city of Dnipropetrovsk, said she was at the rally to make Yushchenko understand that "new elections are a waste of money."

Yanukovych's allies in parliament have also tried to raise the stakes by saying they would support early parliamentary elections only if early presidential elections were also held. To do that, however, they would have to impeach the president _ something that requires 300 parliamentary votes. They currently only have about 260.

Yushchenko said that was not an option. "The president is alive. He is in good health. The president is not a criminal, and I have not asked to resign," he said. "So it's not a subject for fair discussion."