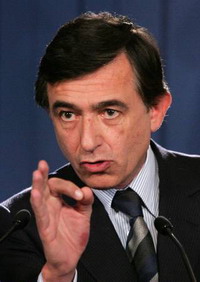 The French foreign minister denounced Iran's announcement of a dramatic expansion in uranium enrichment and urged Tehran to comply with U.N. demands to halt such activity.

"I deplore the announcements made yesterday, which are a bad sign," Philippe Douste-Blazy said in a statement Tuesday. "Once again I urge Iran to respect the Security Council resolutions that require the suspension of all sensitive nuclear activities."

On Monday, Iran said it has begun operating 3,000 centrifuges - nearly 10 times the previously known number - in defiance of U.N. demands.

But while expressing concern about the announcement, French Foreign Ministry spokesman Jean-Baptiste Mattei was cautious about whether Iran had the means to follow through.

"There are announcements, and then there is technological reality," he said.