Historic aircraft carrier Intrepid out of water for body makeover 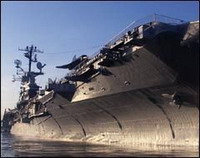 Historic aircraft carrier Intrepid out of water for body makeover

Floating museum, the World War II aircraft carrier USS Intrepid, is coming out of water to get scrubbed and repainted, exposing some rarely seen war scars.

The war veteran turned floating military museum was to be placed Tuesday in dry dock, where it will be perched on 212 custom-made pine blocks while crews scrape and power-wash its salt and weather corroded keel, then paint it the traditional battleship gray.

It took a complex engineering feat just to have the blocks milled to mimic each dent and scar in the keel from years of wartime service, including repeated Japanese kamikaze and torpedo attacks, said Intrepid Foundation President Bill White.

"This has been such an exciting project to see Intrepid go through such an overhaul to honor our heroes," White said in an interview with The Associated Press.

On Tuesday, the aircraft carrier was to be untied from its slip at Bayonne Military Ocean Terminal and towed to an adjacent dry dock by the same six high-powered tugs boats that wiggled it free of mud where it got stuck four months ago.

The tugs will pull the 41,000-ton Intrepid into the graving dock, a concrete bathtub-like encasement about the size of three American football fields. The ship will be winched into place and then lowered onto the blocks.

The encasement's rear door will be shut and sealed, and the water will be pumped out. More than 6,500 gallons (24,600 liters) of paint - enough for about 400 large houses - will be used to cover the ship from bow to stern.

Intrepid's four solid bronze 30-ton propellers will be removed, and two will be offered to the public for sponsorship, White said.

Intrepid took part in every major battle in the last two years of the Pacific theater of World War II.