Russia voiced skepticism Tuesday about Iran's announcement of a dramatic expansion of its uranium enrichment effort, saying it had not received confirmation of the claim. 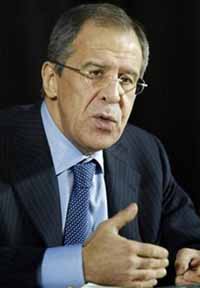 Iran said Monday it has begun operating 3,000 centrifuges - nearly 10 times the previously known number - in defiance of U.N. demands that it halt its nuclear program or face increased sanctions.

Russia was unaware, however, of "any recent technological breakthroughs in the Iranian nuclear program that would change the format of its enrichment effort," Foreign Ministry spokesman Mikhail Kamynin said in a statement.

"We haven't got a confirmation yet that they have actually begun uranium enrichment at the new cascades," Foreign Minister Sergey Lavrov told reporters, according to the Interfax, ITAR-Tass and RIA Novosti news agencies.

U.S. experts say 3,000 centrifuges are, in theory, enough to produce a nuclear weapon, perhaps within a year. But they doubted Iran had so many up and running, a difficult technical feat given the country's spotty success with a much smaller number.