The main U.S. nuclear envoy said Tuesday that the pending release of North Korea's money frozen at a Macau bank should pave the way for Pyongyang to meet its obligations under a disarmament agreement. 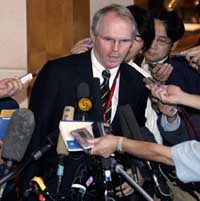 "It's obviously a big step that I think should clear the way for the (North) to step up the process of dealing with its obligations within the 60-day period," U.S. Assistant Secretary of State Christopher Hill said in Seoul.

Hill was referring to a Saturday deadline under a February agreement where Pyongyang pledged to shut down its sole atomic reactor in exchange for energy aid and political concessions. He spoke after the U.S. Treasury Department said authorities in the Chinese territory of Macau had agreed to unblock money at the heart of a dispute that has been a persistent obstacle to the nuclear talks.

North Korea has refused to talk about further disarmament steps until its US$25 million (EUR18.7 million) in frozen funds is returned.

"This means North Korean account holders can withdraw the money in all of the accounts," Chun Young-woo said.

Banco Delta Asia has been blacklisted by the U.S. for allegedly helping the Pyongyang regime launder money and pass counterfeit US$100 bills.

Earlier, Hill said the problem over the accounts should be a lesson to the North that it needs to stop producing nuclear weapons.

Hill's trip to South Korea coincides with a visit by Chinese Premier Wen Jiabao, who is being accompanied by Beijing's main nuclear envoy, Wu Dawei. Hill also will be in Seoul when a U.S. delegation led by New Mexico Gov. Bill Richardson is expected to cross Wednesday into South Korea from the North, where they have met with North Korea's nuclear envoy, Kim Kye Gwan.

Kim told the U.S. delegation that North Korea was prepared to allow the entry of U.N. nuclear inspectors as soon as the US$25 million (EUR18.7 million) in frozen funds is returned.

Hill said Tuesday he had been in contact with the delegation in Pyongyang that includes Victor Cha, the main White House adviser on North Korea.