The Ethiopian government acknowledged detaining 41 suspected international terrorists from 17 countries and said foreign investigators were given permission to question them, said an official statement published Tuesday. 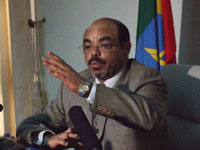 The statement comes a week after an Associated Press investigation into the transfer of terror suspects from Kenya to Somalia and eventually to Ethiopia. Ethiopian officials at the time denied any suspects were in custody, but U.S. officials said they had questioned some of the suspects.

Human rights groups have called the detentions and transfers a violation of international law.

Ethiopia sent troops into Somalia in December to defeat a radical Islamic movement that was threatening to overthrow the internationally backed Somali government. Extremists with ties to the al-Qaida terror group fought on behalf of the Somali movement.

"Suspected international terrorists have been and are still being captured by the joint forces of the Transitional Federal Government of Somalia and Ethiopia," the ministry of foreign affairs statement said. "Pursuant to a common understanding between Ethiopia and the TFG authorities, some of those captured have indeed been brought to Ethiopia."

Twenty-nine suspects have been ordered released by a Military Court and five have already been freed, the statement said. The AP interviewed one woman and the mother of a teenager who were released from Ethiopian custody after two months without being allowed phone calls and without charges against them.

Ethiopia said only 12 detainees will remain in custody after the next round of releases. The government strongly denied that it acted in secrecy or had violated human rights.

"All legal procedures are being followed, and the suspected terrorists have been allowed to appear before the relevant court of law, in this instance before the competent Military Court," the statement said. "Ethiopia can confirm that no detainee has been subjected to violation of his/her rights."

While the statement did not say which nations were involved, it did say that foreign investigators met with the suspects.

"All states who have approached Ethiopia claiming to possess expertise in this area have been allowed to render assistance," the statement said. "But no expert from any country has been given the right or the opportunity to question the suspected terrorists without the presence of Ethiopian personnel."

The government was critical of human rights groups and the media who have followed the detentions.

"Conditions in the real world are murkier that the situation faced by those in an ivory tower," the statement said. "And when those in the ivory tower seek to promote their own agenda under the cover of investigative journalism and the defense of human rights, the situation becomes destructive, even tragic."

The statement justified the detention program as part of the wider international war on terrorism.

"Ethiopia has the legitimate right to defend itself from this danger," the statement added.