It is an urban jungle. Take a walk around the soccer field at Brooklyn College, and there, among the pigeons and starlings, you will see parrots. Bright green feathers, orange beaks, native-to-South-America parrots. 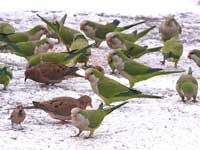 Not quite. These Quaker parrots (also known as Monk parakeets) are no recent arrival to the borough, no harbinger of massive climate change.

They have actually been roosting in the borough for decades, those who watch them say, most likely escapees from shipments sent up from Argentina in the late 1960s or early 1970s, or perhaps accidentally (or intentionally) released by pet stores and owners no longer able to care for them.

They have made their home in a number of U.S. states, including Texas, Illinois, Connecticut, Virginia and Louisiana. In the New York metro area, they have also been seen in the borough of the Bronx and over the river in New Jersey.

While it may seem counterintuitive that parrots could thrive in the cold climes of the U.S. Northeast, Quaker parrots actually come from a part of South America that is temperate, and that has a range of weather similar to what the birds experience here.

"They're so astonishing. You see them and they're loud and they're green and you assume that they're tropical," said Eleanor Miele, associate professor of science education at the college, who has her students observe the birds for class projects. But "they are adaptable for winter."

And, says parrot fan Steve Baldwin, who has dedicated the past couple of years to chronicling the birds, there is no shortage of food because they will eat pretty much anything, like grass, the buds on trees, seeds, fruit.

The Quakers, scientifically known as myiopsitta monachus, the only member of that family, are also helped in their survival quest by their instinct for building nests. They are the only parrot species that does so.

On a recent Saturday, one of the birds could be seen carrying a branch up to an already massive nest in one of the four floodlight poles around the field.

The nests are huge, weighing up to several hundred pounds (kilograms), Baldwin said. Each floodlight at the field has one, and each nest is home to several pairs of the monogamous birds and whatever eggs they lay.

It is those nests as well as the birds' indiscriminate dietary habits that have made them less-then-popular in some places.

Argentina started exporting them because huge flocks were eating their way through crops, Baldwin said. Some states, like California and Pennsylvania, outlaw even having them in the state out of fear of potential agricultural damage.

Other states have had problems with the birds making their homes in electrical towers and other high-up equipment, which they seem to prefer.

In New York, the nests have caused electrical problems like outages and have been known to catch on fire, said Consolidated Edison spokesman Chris Olert.

"Our priority is to remove nests that have the potential to cause fires and power outages" but otherwise the nests are left alone, he said.

Baldwin, a Manhattanite who recently moved to Bay Ridge in part because there's another parrot community nearby, said the birds are not quite the threat that some perceive. He spends part of every weekend with the birds in Brooklyn, documenting them in hopes of bringing their story to the world.

"I'm kind of trying to get the word out to the world that there are wild parrots in Brooklyn," said Baldwin, who has seen dozens of them in the borough. "You can come out to see them, it doesn't cost you anything. You don't have to go to the rainforest to see truly exotic wildlife."