Sunnis and Shiites are now broadcasting with one voice in Iraq using jumper cables and a 12-volt battery, plus financial backing and technical help from the United States. 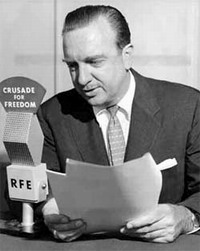 A makeshift radio and television station went on the air last month in Baqouba with a refurbished transmitter lashed onto the top of a radio tower originally built by Saddam Hussein to broadcast propaganda into Iran and Syria.

The young staff - two Sunni and two Shiite Muslims - works together to produce a menu of Arabic news, public affairs and entertainment programming, a collaboration that would not have seemed remarkable before Iraq's sectarian divisions hardened into tit-for-tat killings last year.

Now, however, the project puts the staff members at risk, both because of their cooperation with one another and their affiliation with U.S. forces and the State Department. Just last week, police found the bullet-riddled body of Khamael Muhsin, a reporter since 2004 for Radio Free Iraq, the Arabic service of Radio Free Europe/Radio Liberty, a private nonprofit corporation funded partially by the U.S. government.

The U.S. military spent $36,000 (26,900 EUR) to fix the transmitter and generator for the new station, which now broadcasts across Baghdad and into other areas where sectarian killings and kidnappings have become common. Baqouba itself has become one of the most violent places in Iraq, its surrounding area a battleground between al-Qaida in Iraq and Shiite militants loyal to Muqtada al-Sadr.

"It seems the government is not able to help ... in making reconciliation between Sunnis and Shia, so what I think is, our voice will be strong and helpful for all our people," independent Iraq Radio and Television Network co-founder Samir Kamies said in an e-mail interview in English.

Despite its sponsorship, the network is independent of the U.S. government and the Iraqi government, its Iraqi employees and U.S. benefactors said. Unlike better-known U.S. projects such as Cuban-themed Radio Marti or the Cold War-era Radio Free Europe, the Iraq network is not directly produced by the U.S. government, although the State Department provided technical and programming help.

"It is not run by the government of Iraq, the provincial government or the mosques," State Department spokeswoman Susan Phalen said. "The Iraqi broadcasters alone determine the programming and design the production, with (State Department) advice and training."

The U.S. government hopes the network's mere existence will be an advertisement for stability and reconciliation, the political goals set by President George W. Bush before U.S. forces can begin to withdraw from Iraq.

The network also is meant to show the value of a free and independent press, although there is more frank and critical coverage of Iraq's troubles and the role of the United States to be found elsewhere in Iraq's emerging media. The network's general interest programming is heavier on consumer news and mild-mannered chat shows than politics.

A 28-year old Sunni, Kamies produces an agriculture show for the network. He considers IRTN co-founder and general manager Rafed Mahmood, a Shiite, as his best friend.

Among the network's other offerings is an earnest talk show called "Common Ground" that features the station's mixed staff talking, laughing, drinking tea and dancing together. The first episode featured a Sunni-Shiite soccer match.

"The risks are everywhere actually," Kamies said. "The insurgents do not want anything good to go in our country, and they target everybody in our country."

Kamies said his family knows about and supports his work. Some Iraqis who have worked as translators, go-betweens or other aides to U.S. forces have become estranged from their families as a result, or choose to hide their work from family and friends.

The shoestring network is now funded partly through advertisements and public affairs notices paid for by U.S. military and partly by the sale of hats, coffee mugs and other merchandise.

U.S. advisers are working with the station founders to develop a longer-term business plan, Phalen said.