A top U.S. Democratic congressman said he did not have "personal meetings" with a member of Egypt's largest opposition group, the banned Muslim Brotherhood, during a recent official trip. 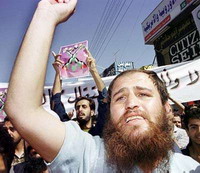 U.S. House Majority Leader Steny Hoyer's spokeswoman, Stacey Bernards, said the Maryland Democrat and his bipartisan delegation participated in a meeting Thursday with members of Egypt's parliament including Mohammed Saad el-Katatni, who is the leader of the Brotherhood's parliamentary bloc.

Hoyer also "spoke briefly" with el-Katatni later Thursday at a reception at the U.S. ambassador to Egypt's home, Bernards said.

"However, the bipartisan delegation, including Mr. Hoyer, did not have personal meetings with Mohammad Saad al-Katatni," Bernards said.

A Brotherhood spokesman said Saturday that Hoyer and el-Katatni had met privately at the ambassador's home. U.S. Secretary of State Condoleezza Rice has refused to meet with the Brotherhood, which is Egyptian President Hosni Mubarak's biggest rival.

El-Katatni told The Associated Press Sunday that he and Hoyer had met twice - once at the parliament and again at the reception at Ambassador Francis Ricciardone's home.

El-Katatni said the parliament building meeting lasted about two hours and involved other lawmakers including members of Hoyer's delegation and the parliament speaker, Fathi Sorour.

Bernards said the parliament speaker, who is a member of Mubarak's ruling party, had invited the parliament members including el-Katatni to the meeting without the knowledge of Hoyer and the delegation.

"It was arranged by the embassy. We didn't ask for this meeting," she said.

El-Katatni said he was under the impression that Hoyer had requested to talk with him at the reception.

Bernards said Hoyer had a short conversation with el-Katatni at the reception.

Hoyer "characterized it as a conversation like he had with many other guests at this reception," she said.

Though officially banned since 1954, the Brotherhood is tolerated by the government and in recent years has focused on politics and social welfare.

The group got its biggest boost in 2005 when its members, who ran as independents, became the largest parliament opposition bloc, winning one-fifth of its 454 seats. But as the Brotherhood's popularity increased, so did government crackdowns on its supporters.

"I attended the meeting (with Hoyer) not as a Brotherhood member but as lawmaker," el-Katatni told the AP.

The U.S. Embassy in Cairo declined to comment Sunday.

An embassy spokesman said U.S. government policy does not bar meetings with the Brotherhood's members of parliament and Hoyer's talks with el-Katatni did not represent any change in U.S. policy toward the group.