The Dutch are going to spend billions of euros in coming decades to adapt their low-lying nation to the effects of climate change. 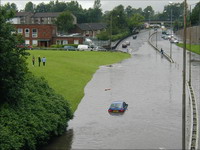 A report released in Brussels by the Intergovernmental Panel on Climate Change warned of drastic consequences around the globe - from mass extinctions to increased flooding and more violent storms - if global temperatures rise 2 degrees Celsius (3.6 degrees Fahrenheit) above the average in the 1980s and '90s.

The Netherlands, where two-thirds of the 16 million population lives below sea level, faces threats on at least three fronts: increasing risk of river flooding caused by heavy rain and melting glaciers, rising sea levels along its North Sea coastline and more frequent droughts that will dry out land, causing houses and possibly dikes to crack or subside.

"Adapting to climate change is necessary and forces us into action and innovation," said Dutch Agriculture, Nature and Food Quality Minister Gerda Verburg.

Professor Ekko van Ierland, an environmental economist from Wageningen University, said coping with the threat of river flooding alone would likely cost the Dutch an extra 26 billion EUR (US$35 billion) in coming decades.

The Dutch already spend more than 1 billion EUR (US$1.3 billion) annually - around 1 percent of the national budget - just maintaining and improving the dikes, dunes, pumps, sluices and windmills that work constantly to keep the country dry.

Van Ierland's spending estimate broadly covers a policy called "Room for the River," which is intended to prevent catastrophic river flooding by deepening channels and setting aside large areas as floodplains where water can be gathered to ease pressure on earthen dikes at times of high river levels.

Experts also said Thursday that the government should consider rerouting part of the Rhine, one of Europe's largest rivers, because in the future it may no longer be able to flow into the North Sea via its current route.

"With rising sea levels, you would need to pump the water upward at the end, and that's almost impossible," said Anneke Oosterhuis, spokeswoman for the Dutch Environmental Planning Bureau.

The proposal was seen by some as far-fetched, but professor Pavel Kabat of Wageningen University's Climate Change and Biosphere Center, said Friday it would likely be a "much more practical solution than negotiating with thousands of companies" to move their businesses away from the banks of the Rhine.

While the Dutch have battled high water for centuries, the specter of drought drying out farmlands and the very dikes that keep the country dry is now looming thanks to summer heat waves and increasing demand from agriculture and power stations.

"I returned here recently and the country was brown instead of the usual green," Kabat said, referring to the color of parched pastures.

One possible solution would be to give subsidies to farmers who take livestock off the land, Kabat suggested, adding that it would have the added effect of cutting production of methane, which is produced by cattle and other farm animals and is a far more potent greenhouse gas than carbon dioxide.

But the changes will not happen overnight.

"Historically, (Dutch) farmers are not used to dryness," he said.